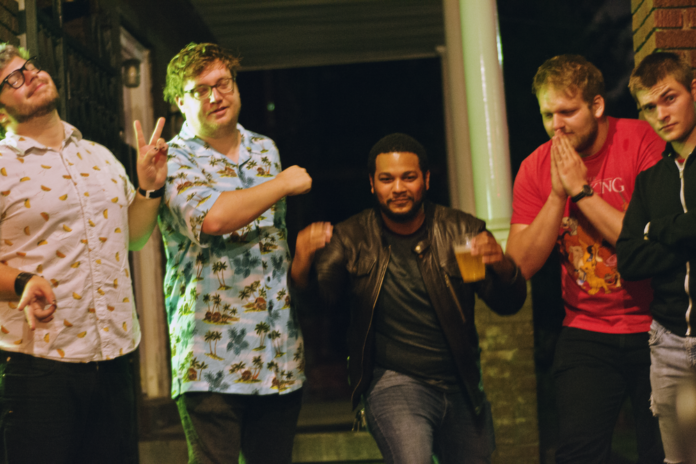 DIY : Dollar Signs passive-aggressively confront death, mental health, and the idea art itself on This…

This is part 1 of a series I’m undergoing writing for bands playing The Fest in Gainesville, Florida this year.

My dad and I recently had a heated disagreement about the band Rozwell Kid. Upon a first listen, my dad said, like many first-time listeners, “this sounds just like Weezer.” It took some convincing on my part to reassure him we were listening to an up-and-coming band from West Virginia and not the polarizing power-pop superstars. My dad then proceeded to call the band ripoffs and “would be lucky if they didn’t get sued.” While I strongly disagreed that Weezer would have time to care about a band with likely less than 1/100th of their popularity, it did have me thinking: when does influence go too far? Where’s the line between homage and copycat? After thinking for a while, it somewhat dawned on me: I don’t particularly care. If a band is able to write good songs consistently, does it really matter if they remind you of someone else?

That’s where Dollar Signs comes in. Hailing from Charlotte, North Carolina, this self-described “student loancore” band has heard their fair share of comparisons to Jeff Rosenstock and his former punk collective, Bomb The Music Industry! They’ve also gotten comparisons to bands such as AJJ and The Taxpayers, particularly when they began as a 2-piece folk-punk duo. And yes, the confessional lyrics, gratuitous usage of synthesizers, trumpet and glockenspiel, and a guitar tone that could be best described as “ska-apologist” makes this quite easy to see why. But the major appeal of Jeff Rosenstock is his openness, self-deprecation and sense of humor, all of which are hard to replicate. And while Dollar Signs frontman Erik Button would likely not deny Jeff’s influence on him, he is still his own person with his own perspective, problems and passions. Dollar Signs might be Bomb The Music Industry! lite in aesthetic, but they are fully unique in their substance.

The band’s newest album, This Will Haunt Me, was released earlier this year on A-F Records, and might be their greatest and most cohesive work yet. Opening track Cry Hard, barely a minute long, gives listeners a pretty good idea of what to expect for the 20-odd minute run time. After some crisp gang vocals, Button lays into the many things that make him cry, such as talking to his mom, stupid things he said nearly a decade ago, a Mischief Brew song, NPR, and sometimes, for “no good reason at all.”

This self-mocking but sincere attitude is prevalent on quite a bit of the album, with lyrics such as “oh my God my dreams are dumb” on Tears / Beers / Fears or “I’m the Usain Bolt of running from my problems” on Shallow Pop Songs. Dollar Signs set themselves up for mockery with this emotional vulnerability, and are the very first in line for said mockery. Inject this attitude in a set of tightly written basement bangers, and you might just well have a defining millennial punk album. There’s a song whose name is just an emoji for God’s sake.

That’s not to say Dollar Signs always keep this lighthearted and comedic tone to the point of monotony. There are two moments that really hit me every time I hear the album in full: one is the latter half of the aforementioned Shallow Pop Songs and its transition into the title track. The former, after a jokey first half about escaping your problems by sacrificing hard music for vapidity in times of struggles with mental health. And there’s nothing wrong with that; while Lil Yachty might not be as emotionally resonant as say, Mount Eerie, I’ve certainly listened to his music more due to how much grief the latter gives me to hear. It’s a message a lot of young people can probably relate to as they stumble into adulthood. The second half, however, somewhat shatters the idea that this is a catch-all solution to live getting hard. From Button’s perspective, he’s texting his friend about the hypocrisy of the movie Avatar’s message, touting himself a genius. However, the detail that it was the “last text I sent to him” and the lack of response imply that his friend has unexpectedly passed away, and his final interaction was an attempt at pointless discussion about a movie most people can’t even name characters from.

This emotional left turn glooms the mood of the rest of the song and is a perfect segue into the title track. A piano ballad of sorts, the irony and self-awareness Dollar Signs has lured the audience into with is completely stripped away. When you’re alone, there’s nothing to bounce these ideas off of. You’re left with your personal demons and Beelzebubs and nothing else. The hilarious repetition of “everyone you know is a DJ” marks a turning point in the song, however. While still being melancholy as all hell, becomes somewhat triumphant, which is increased by the full-band who has now come into the mix, and the later repetition of “I’m not gonna rot, right here!” It’s obvious why this was a good pick for the band to name the album after; it still maintains traces of the sarcasm and comedy Dollar Signs have built up their hype up with up to now, it’s a very emotionally and mature track.

The second moment is the longest, and my personal favorite, song, The Devil Wears Flannel. The song starts acoustically, giving us a look into Button’s songwriting process. It has the line “I don’t make art / all I do is complain, complain, complain,” a line any self-hating artist can infinitely relate to. The song then picks up with the full band as Button decides to take the easy route out and sell his soul to the devil to write a song people will remember even after he’s dead. The song has a brief pause and then turns into the most tongue-in-cheek vapid meaningless love song (which still manages to have some great harmonies and serious shredding near the end.) The song goes back to how it originally began, with Button coming to the realization that not only does Satan suck as a lyricist, but most people don’t really value authenticity in their art and “just want a love song / about them.” This song’s constantly changing musical structure is quite ambitious for a little-know punk band like Dollar Signs, and potentially the best song they’ve written as a group yet (although Holiday Inn from their previous record Yikes Is still quite close.)

And frankly, that’s why I couldn’t care less whether the band borrows so liberally from Jeff Rosenstock projects, or why Rozwell Kid borrows from Weezer, or Retirement Party and Modern Baseball, or any other stupid band you want to compare to another stupid band. If an artist can make me feel something and give me something to sing along to via music they’re proud of, then I couldn’t care less about genre-pioneering.

Dollar Signs plays the Fest at High Dive on Sunday, 10/28/18, and Pre-Fest at the Orpheum on Wednesday, 10/24/18. They’ll also be playing a hometown show a few days before if you’re lucky enough to have them as a local band.

After buying the new Dollar Signs album either on vinyl or from their Bandcamp, consider throwing me a few dollars for this piece: https://cash.me/$trashage

DIY : How to acquire more obsolete office furniture and reuse...

DIY Furniture : How to transform your dining room table...