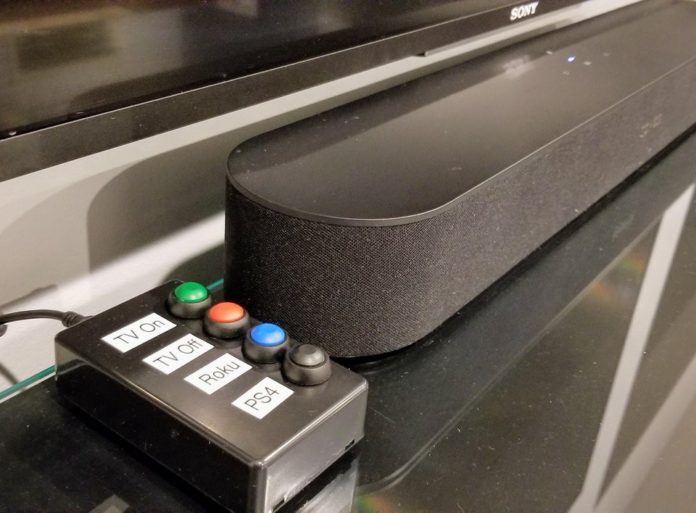 You probably don’t actually use many of the buttons on your TV remote, because most of the functionality you actually use is handled by a set-top box or a video game console. Still, you need your remote to turn the TV on at the very least, which means misplacing the remote is a big deal — especially since most modern TVs hide those buttons on the back of the bezel these days. Luckily, it’s cheap and easy to build a DIY controller like this one from Redditor feydgoodall.

They created this device because their smart remote is unreliable with their TV, and the buttons built into the set are hard to get to. It has only four buttons: TV on, TV off, input 1 (Roku), and input 2 (PS4) — just the buttons they actually use. The device sits under the TV and has an upward-facing infrared LED. Pushing one of the buttons sends the corresponding IR code to the TV, just like if it was coming from the TV’s actual remote.

To assemble this you’ll need some kind of Arduino-compatible microcontoller development board, and feydgoodall used an Arduino Nano clone for theirs. Other than that, you just need enough buttons for your setup, an IR LED, and an enclosure. This uses Ken Shirriff’s Arduino-IRremote library, which is simple and easy to work with. Just determine which codes you need for the remote functions you want to use, and then have the Arduino send them through the IR LED when the corresponding button is pressed. With this, you’ll have at least one remote you don’t have to worry about anymore!

DIY Crafts : Over 100 Handmade Gifts that are perfect...