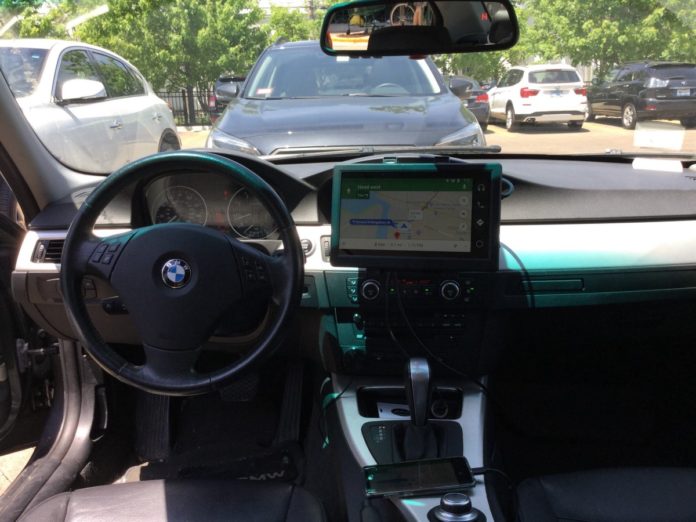 After not finding much information about Android Auto retrofits on the web, I thought I’d contribute what I’ve learned through this article. Enjoy!

I’m not much of a car guy. I’ve had my 2007 BMW 328xi since the spring of 2009. And to be honest, I still like it now just as much as I did then in almost every way. It drives me back and forth from Lincoln Park to my office in the Hancock Center, it runs errands across town, and it shuttles us back and forth to Notre Dame for six home games a year.

I am, however, a bit of a gadget head. So while the car runs just fine (with some to-be-expected-but-still-annoying maintenance), and I love the sound of the stereo, what bothers me about my car is the iDrive system, which looks like the Weather Channel from 1992:

After some casual Googling, I found that Audi has surpassed BMW in the connected driving department, and I quickly scheduled a test drive of a slightly used, certified pre-owned A4 at Fletcher Jones. What drew me to the car more than anything was the “virtual cockpit” system, where the entire instrument panel is one big screen:

What most took me by surprise in my test drive, though, wasn’t this virtual cockpit. I became absolutely enamored with Android Auto. Not only can it use Waze or Google Maps (to which no car navigation system can hold a candle in my mind), but it can also play Spotify, Google Music, PocketCasts podcasts, etc. And, more important that anything, it eschews some terrible car manufacturer’s voice recognition system for Google Assistant, the gold standard for voice response AI.

And while I loved the A4 in my test drive, I couldn’t help but think: would trading my beloved, fully paid-off, and lowish-maintenance 328, combined with about $38,000 out of pocket, be worth it just for Android Auto? No way. But now that I’d had a taste of what it would be like to have a “smart” car, I couldn’t go back to my 8-bit-looking iDrive, either.

I started by looking to see if I could turn my dashboard screen into an Android Auto display. After much reading and a few hours of YouTube, I decided against taking apart the entire dashboard of my car and rewiring things:

I decided that I needed to have:

The 10.1″ screen is by a company called Elecrow. I’ve never heard of this brand before, but I figure that for only $110 with free shipping and free returns, it was worth a shot. I had originally ordered a 7″ screen, but it was DOA and returned the same day as I received it. Be careful buying no-name electronics over the Internet. That said, I’m glad it happened, because I like the 10.1″ screen much more.

To power the monitor in the car, I needed a cigarette lighter socket adapter, which was less than five bucks. One of my favorite features of the Elecrow monitor is that it turns on immediately upon receiving power, meaning I don’t have to turn it on when I get in the car. The power cable hangs down from behind the screen and plugs into the power socket in the ash tray.

To power the display, I only needed a way to get an HDMI signal from the phone to the monitor, as the Android Auto app runs directly on the phone and the Galaxy S8+ mirrors the display out via a simple USB-C to HDMI adapter. It even has a pass-through to provide charging power to my phone while connected to the monitor. Not a bad little device for $24.

Finally, I only needed Bluetooth stereo. I picked up the AUKEY Bluetooth kit for $22 that connects to the Aux port in the car armrest.

Unfortunately, the Aux port in older BMW cars is prone to picking up engine noise, but a $9 Mpow ground loop noise isolator took care of that problem easily. An AUKEY dual-port USB car charger in the glove compartment keeps the AUKEY powered while fast-charging my phone at the same time.

When I get in the car, I connect the phone to the USB-C before starting the engine. After the car starts, the monitor turns on by itself. The phone automatically connects to the AUKEY Bluetooth for stereo streaming and connects to the BMW built-in hands-free Bluetooth phone system. Upon making these connections, the phone automatically launches Android Auto, and I’m off and running! I can even hide the Android Auto interface and turn on the ESPN app if I want to have College Gameday on in the background when I’m driving to South Bend.

I’m tremendously happy with the results of this little DIY project:

But, that said, there are a few things I still wish I could do or do differently:

What do you think? What ideas do you have for how my setup could be improved? Hit me up! And thanks for reading.

DIY Crafts : DIY Projects for a Bright and Cheery...

DIY Crafts : Hey there! Join us on Instagram and...