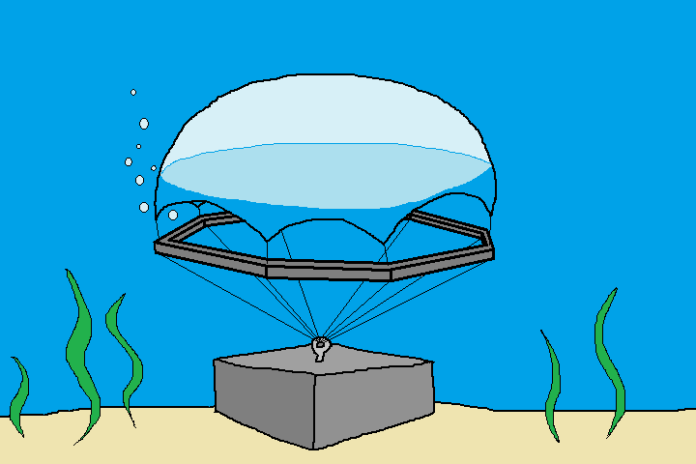 DIY : Build Your Own Underwater Bubble Shelter! (and Maybe Drown!)

Or, “How to trap a huge bubble of air underwater for fun, profit, and possible drowning.” Now, suppose you want an underwater base. Why? Bond villain maybe? Choose your reason. But how can you achieve this without bankrupting yourself many times over?

As with many other areas of life, the key is moderation. Anybody can construct an underwater habitat, just not a large one. Due to the tremendous buoyancy of air submerged in water, you need 64 pounds of weight for every cubic foot of air you want to keep submerged.

That’s just to achieve neutral buoyancy, too. If you mean to actually keep it securely positioned you ought to at least double that. This should begin to make some sense for you of why underwater living space is such a rarity. The main cost isn’t the structure, but transporting and handling the weight needed to keep it submerged.

So, underwater structures containing air require powerful restraints, not supports. This is why even to restrain a bubble of air large enough to surface from the waste up within, you’ll need some very strong cord. Nylon or steel cable probably. These guys used nylon:

As you can see, there’s also a welded octagonal ring. This keeps the bottom of the bubble nice and wide for easy entry, otherwise the buoyant force of the air would pull the vinyl material into an inverted teardrop shape with only a small opening near the bottom.

They secured their bubble using nylon netting over the top, as the vinyl by itself wouldn’t be strong enough. They then tied the corners of the steel ring to a boulder, which served as the ballast weight. If you can find a ready-made ballast weight already on the bottom, it solves most of your problems.

This is because the alternative is supplying your own. This is where underwater habitats get difficult and expensive. Most people who have built their own small habitats use concrete blocks, which of course are a bitch to transport and deploy safely to the seafloor.

This portable habitat also ties off to a boulder, though because it’s adapted from a lift bag, most of the material is opaque.

These plant habitats are restrained by pilings driven deep into the ocean floor. This is riskier but less trouble than finding suitably rocky undersea terrain, or supplying your own weights from the surface.

There’s a few people on Youtube who have built substantially smaller versions of this, which basically just amount to an inflatable, oversized diving helmet. But then what is a diving helmet, but a compact diving bell?

Here’s another one. As you can see, it’s not easy to do, but neither is it so hard that regular individuals (rather than corporations or governments) can manage it. You’ll note both used netting to reinforce the vinyl. The small ones are a weekend project for anybody with some DIY knowhow.

The larger ones, like the first video in this article or the plant habitats, will require more of a budget. As you scale up, cost increases exponentially, the bane of my existence and reason why there are no underwater cities today. Even though there’s a football field sized space station in orbit! Life is cruel sometimes.

As an aside, if you mean to stay down there longer than a minute or two you’ll want to replenish the air continuously. Do this with an electric, oil free, continuous duty cycle pancake style air compressor on the surface with an airline down to the shelter. It should be capable of 3.0cf/minute to ensure it can support 1–3 people.

Weighted Blankets DIY : Your little guy will love this...

DIY Crafts : Easy instructions for how to make a...