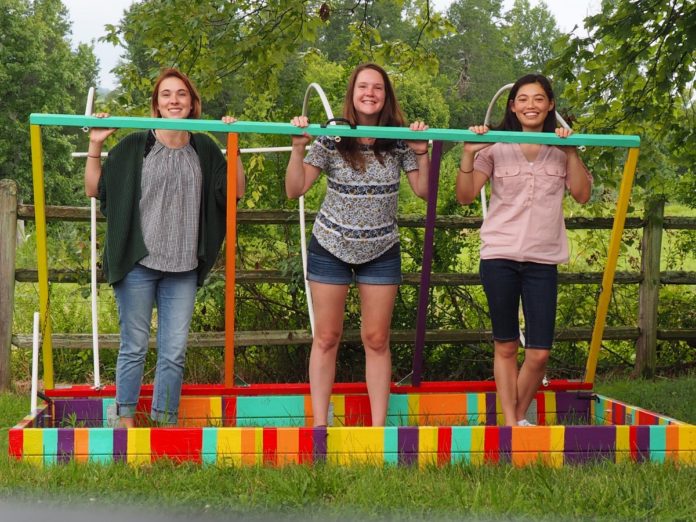 DIY : Bob the Builder vs. The Engineers: Greenhouse Edition

By McKensie Nelms and Madison Chan

[This is a narrative about our experience building a raised-bed greenhouse. If you’re looking for our detailed instructions, those can be found here.]

One of our projects at mobius this summer was to build a raised-bed garden in preparation for testing some of our experimental materials and designs for a biodegradable, plantable flower pot. One of our areas of active research is to look at different agricultural and horticultural applications for our lignin-based plastics. As a part of this R&D, we needed a “real” space to bury different plastics in the soil, test some container designs, and draw some real-world comparisons to products on the market now. So, “Let’s build a mini-greenhouse!” we said. Simple enough, right?

In today’s world, the internet can “teach” us how to do just about anything, except…not really. It turns out there’s a big difference between knowing how to build a greenhouse and ACTUALLY building a greenhouse.

We had everything planned out to make this crazy, raised-bed, convertible greenhouse. The internet has plenty of blogs and information about building these, and we figured that, as engineers, we could just piece together different ideas and get this spectacular, amazing, incredible greenhouse. We ended up with a crooked door on top of a multicolored box. BUT we did fix it, and here’s how.

It all started out simply enough. We went to Home Depot, bought all of our lumber and hardware, and pulled out our plan. Everything was ready to go!

Except for one thing.

We didn’t have a drill yet.

This turned out to be our saving grace, because instead of jumping right in with a bunch of screws in one hand and a drill in the other, we sat down and planned it out. We laid out the pieces, marked the wood where screws and brackets would go, and drew a series of technical blueprints.

This was important, because it was during this process that we had a number of revelations. Like that a hinge, corner bracket, and conduit bracket can’t all occupy the same space in the corner. We redrew the plans and made the appropriate adjustments, but quickly realized that we would have to sacrifice some aspects of the plan (e.g. the PVC hoops being right at the edge) in order to satisfy reality.

[Insert crappy drawing of several screws breaking the laws of physics or whatever rules of science apply.]

Then we realized something else. For a bunch of engineers, we sure didn’t know a lot about building things. We knew enough to drill pilot holes and make sure the screws didn’t run into each other, but little beyond that. For better or for worse, this didn’t stop us, because we all have a healthy sense of “we’ll figure it out at some point”. Once the drill was acquired, that made us a little dangerous.

Creeeak. What was that? Was that the wood cracking?

Rrrrrrrr. Hmm, no, I guess not.

CrEEAck. That was definitely the wood cracking, but we can’t see anything so it’s probably fine…?

It became clear that our current system wasn’t very efficient, so two people started screws and hand tightened them with screwdrivers, allowing the person with the drill to follow behind and tighten them quickly with the drill. Several hours had passed before we finished the base and lid and stacked them. Success! Then we looked down and realized the lid didn’t match up with the base. Sadness. [Insert crying emoji]

Our thoughts on this fell into three basic categories:

SURPRISE! It turns out we couldn’t. So we called for help.

You know in a game show, when they get one call or a help button? Well, we have a “Tony button,” and when everything starts to go south, we hit it. Then Tony comes in, assesses the situation, and offers quality advice.

We learned that right angles in theory are almost always NOT right angles in reality. Our desire to screw the corner brackets in until the screws could go no further had pulled some of the corners into angles that were less than 90 degrees, causing the frame to warp.

Tony suggested we back out the screws, one corner at a time, to find out which ones were causing the issue. It was, naturally, the last one we decided to unscrew that was the problem. Unfortunately, as we loosened the screws, the frame became weaker, but with some patience, love, and 4 more corner braces, it was (almost) perfect.

Then we turned to the PVC arches that would provide the greenhouse roof for our raised bed. Cowed by constant fear that the other end was going to fly out and hit us in the face, we very carefully bent the pipes, with two of us holding them in place while a third screwed in the conduit brackets on top. Alas, another problem had surfaced. The brackets were too big, allowing the pipes to slide out — the very definition of “you had one job”. So after discussing numerous ways to solve it (below), we settled on the third option as being the easiest and most robust.

So, what we really needed were some bolts, and washers and nuts…and while we’re at it, an L screw for the side…oh, and paint…and…

Home Depot, my old friend, who knew we’d be seeing each other again so soon? (Yes, we went to the hardware store nearly every day that week.)

Of course, once we returned, we were glad we’d gone. The PVC was easy to drill through (much easier than we’d expected), and the bolt setup fit perfectly. One hiccup was that the first holes were drilled without regard to the way we’d previously bent the pipe, and turning it back to make the holes face the right way ended up being rather difficult. After some deliberation, we just drilled new holes. Not everything requires a complicated solution.

Our one regret (on this part, at least) was that we’d been a little too generous with the amount of space needed between the bolts and the bracket. This meant that the PVC hoops were a little more free to move than we wanted, but it still fixed our initial problem. Those pipes aren’t going to be flying off the frame anytime soon. Probably. We hope.

The remaining three feet of PVC left over from cutting the center pipe to size was cut into two 1.5 ft. segments that can be used to brace the lid. After holding it for each other, we realized there needed to be a way to prop it up. It’s true, necessity is the mother of invention. We created a setup where the pipes are braced on one end by a bolt and notch into an L-shaped screw on the lid.

Now, after tackling our various missteps, we got to the easy part…PAINT.

After discussing different options, we decided to just use every color. Home Depot sells small containers of sample paint, and they turned out to be the perfect amount. Granted, it does look like a rainbow threw up on it, and that’s going to attract a lot of bees, but we are building a garden and the bees can pollinate it. Besides, everyone wants to “save the bees!” And we really only have a beef with the wasps. But that’s another story.

The last thing to do was coat it in a clear, waterproof sealant. And here the raised-bed/greenhouse got in its last laugh. We pried open the paint can and found ourselves looking at…iced coffee? Definitely not clear. Maybe it dries clear. We painted it on a small section and watched the brown drip down on the yellow paint. Nope. After reading online reviews, we discovered that clear was the level of opacity, not the color- something an art student probably could have told us. The price we pay for a lack of field-of-study diversity on our greenhouse build team.

We returned to Home Depot and picked up a clear, colorless polyurethane. Then we popped the lid and almost had a heart attack. It was even darker than the first- something like a dark maple syrup. But luckily this one did dry clear, leaving a nice glossy finish that brought out the color of the paint.

A little reassembly of the parts removed for painting, the addition of a spring to hold the lid open, and we were really done.

All in all, we had our ups and downs, but it turned out well. Along the way we learned that planning is great, but the best understanding comes from building it yourself. It was a good lesson for the future, that even though you may think you understand the idea behind something, it important to listen to those who have experience with it, and if possible, try to get some hands-on experience with it yourselves. You’d be surprised how much you learn from building a simple raised-bed garden.

And next time…we’re giving it wheels.

DIY Crafts : Breakfast in PJs. Fun theme for a...

DIY Crafts : These cool magnets can be made with...

Home Improvement : Choosing Gas or Electric Fireplaces For That Perfect...