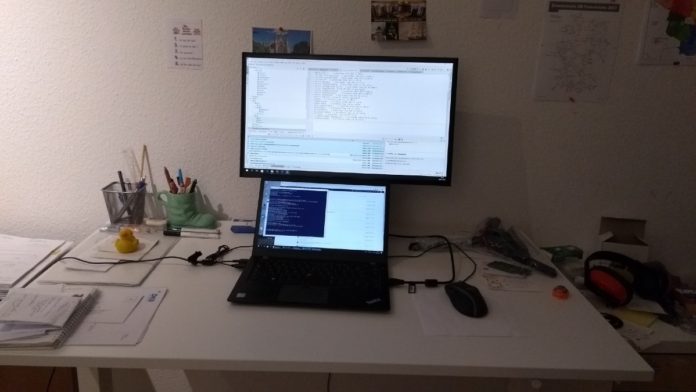 DIY : An easy, but scary upgrade – Robert Jack Will – Medium

After 13 years of staring at my laptop screen when using the computer at home, I decided to adopt a more comfortable sitting position and get a proper computer monitor. I was amazed how cheap some of the really good displays were and found that the significant extra-costs for “business-grade” displays were mostly in better stands and greater adjustability of the stand. As I could make the display higher just by putting some old books under the stand and I was also thinking about installing a wall mount, I eagerly went for a cheap display with a very simple stand and the standard VESA mounts on the back.

Then, after 18 months with my book-supported monitor and a new desk coming in, I was ready to use those VESA mounts. Since my new desk is height-adjustable up to standing height (yes, I like to turn cranks, not only on my bike!) and the old way of supporting that monitor was already very wobbly, I wanted a more solid solution. So I bought a monitor arm that bolts on the desk surface. Now I can crank up my desk and the monitor will stay firmly in place! Even better, I can precisely adjust height to have my two screens on top of each other:

Alas, attaching that new desk stand turned out to be harder than thought — almost harder than assembling that entire manu-mechanical IKEA desk with all its moving parts. (Admittedly, most of the moving parts of that desk are well hidden in its legs, but I digress…)

The problem with the monitor mounts is that the stand’s VESA plate has not only the correct bolt-holes for my monitor (the ones on the inside), but also for another, larger size — and that’s a problem, because the plate now bumps against the monitor’s mount for its factory-provided stand. While the stand is easy to remove (gentle, but firm pulling!), the plastic part to which the stand attaches stays on and protracts too much for the new mount to attach.

And here comes the scary part: This get-out-of-my-way part is attached by two simple screws, but those are only accessible from the inside of the monitor!

To get at those screws and easily unscrew them, I had to remove the entire cover and expose all the internal electronics. The article which told my how to open it recommended to buy a pro spudger kit and I imagine this could really be useful also for opening smart phones and other modern electronics. But since I didn’t want to wait to put my monitor back up, I found my own tools in our well-equipped kitchen:

The pointy-knife serves for prying the little hooks away and then the cheese-grater gently lifts up the cover. There are around four such hooks on each side and as the above article explains, the bottom sides has little holes/nooks for starting the process and then work around the sides to the top. Since those were not the best tools and I used a little too much trial and error, the whole process made some scratches in the plastic, but none of them on the front, so it all looks really neat now when finished.

Here are some pics of those little hooks, in real life just as hard to see as on the photos:

After passing the dare of opening that cover and unscrewing the old stand-holder, I was presented with another fun challenge: the removed piece left a hole in the back cover large enough to attract large amounts of dust, insects and children’s fingers to the inside.

But seeing how some internal parts of the monitor were attached with some kind of duct tape, this provided an instant solution:

I put that on both sides: inside the back cover and out on the back side, so it’s not visible from the front or the side. Now I have my super adjustable and solid stand working:

And that is the happy end of my story!

DIY : To Sterilise An Industrial Kitchen Area Without Utilizing Chemicals...

DIY Furniture : This is gorgeous! You are going to...