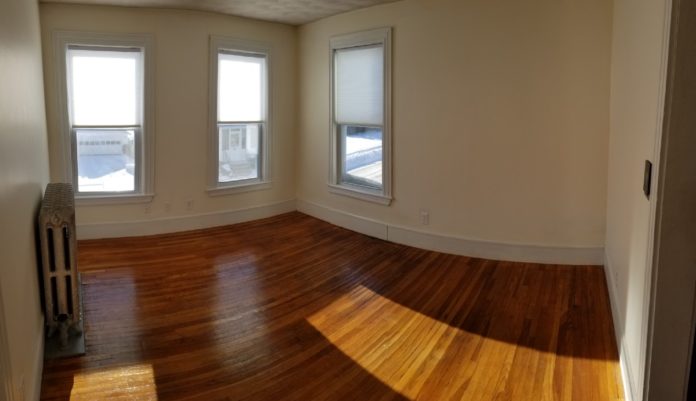 DIY : 7 Lessons Learned From My First Real Apartment Turnover In Another State

This past weekend was quite the event. I flew out to Massachusetts intent on painting one of the units at South Pine Street and found myself committing to much more work than that. I learned a lot over the four days that I was there, and I wanted to share what happened, as well as what I plan to do differently in the future. So first, let’s start at the beginning:

It started with a simple painting quote

Mrs Money Smith gave a call to a painting crew that we’ve used in the past to see if they might be available and interested in patching and painting our 2nd floor unit. The previous tenant of this unit actually moved out two months ago and I still hadn’t found anyone to rent it, so I figured a fresh coat of paint would make a big difference. Up until this point, both my property manager and my real estate agent trying to fill the vacancy had both let me know that the unit was in decent condition, but the rental market was slow. They had also both agreed that a new paint job certainly wouldn’t hurt, so that was the plan. When Mrs Money Smith let me know that the painters quoted her $1,000 + materials for the job, that sounded pretty reasonable to me, I as ready to sign off on that right away to not waste time.

Luckily for me, Mrs Money Smith checked out flights from Los Angeles to Boston and realized that I could get a round trip, non-stop flight for just over $400! This was great news, I could certainly make my way out to the apartment, see some friends (and convince them to help me paint), and be back home in warm Los Angeles by the end of the long weekend. We both agreed that it was the most fiscally responsible to fly out and do the work myself, so that’s what I did.

I’m not a huge fan of flying, I’m 6’ 1 and airplanes weren’t made for people my size, but I figured if I could suck that up, I would feel rewarded by saving myself the difference in cost, which would surely make up for the flight. I reached out to a few friends who all agreed to meet me at the property and help with the paint job, and I expected that since there were four of us, we could get the work done in a day, two tops.

Boston was certainly cold, I wish I had packed mittens because the weather actually dipped down to -15 with the windchill, and it was immediately clear to me that I had probably picked the worst weekend of the year to visit. Nonetheless, my friends picked me up from the airport and after some catching up, we all went to sleep to wake up nice and early for work. When we arrived at the house, I was genuinely surprised at the condition of the apartment. The previous tenant was always very tidy and took excellent care of everything, but the apartment seemed abnormally dirty, and was immediately obvious to me why the apartment had been sitting on the market for so long. It wasn’t just because the rental market was slow, it was because I had clearly priced the unit too high, and the appeal of it all was definitely lacking.

For a brief moment, I fell into panic. I hadn’t prepared for anything more than painting, the job at hand was certainly much more than that, and I wasn’t sure if I would have time to address everything. Luckily my stress-management kicked in shortly thereafter and I started to make a list of everything that needed to be done. That list looked something like this:

I estimated that the first four items on the list were the absolute must-haves, and if there was time left over I could have my buddy Steve, who is an electrician, replace the outlets and switches. Unfortunately some of the outlets were that ugly almond color, and I much prefer the white look as it appears much cleaner. It certainly wasn’t necessary, but it would be icing on the cake if we could get it done.

After I made the list, we headed to the store to get what we needed. At the store, and under the pressure of time, we convinced ourselves that we could just spot paint the walls where we would need to patch, which would give us enough time for everything else (mistake #1). We also decided that we should just get all of the electrical supplies there since Steve would be able to work on replacing outlets while the others worked on the paint (mistake #2). Lastly, since we didn’t have the exact paint ready to go, we used the paint matching capabilities that the guy behind the service desk recommended and only got one gallon of that paint since we were only touching up specific spots (mistake #3).

We headed back to the property and finally got started, but the day had already mostly gotten away from us, so we would have to act fast. We all went in different directions within the unit and got to work immediately. I quickly noticed that the window sills were particularly dirty, which was surprising because I had paid a cleaning service only a month before that was supposed to perform a deep clean of the apartment after it was vacated.

When I took a minute to realize that not only were the window sill dirty, there was actually dust and dirt all over the apartment, it was apparent to me that the cleaner didn’t actually complete the job that they told me they did. I immediately texted the cleaner to let him know that I wasn’t satisfied with the cleaning and requested that he come back as soon as he could to remedy the situation. He acted surprised at the thought of the job not being finished in his first response to me, and then didn’t respond after (writing this out reminded me of that and I actually just texted him again to see if he wanted to finish the job or just refund me the payment).

After that text I got back to painting. The good news is that when the dust and dirt isn’t egregious, you can actually just paint right over it and the outcome is essentially the same. I proceeded to paint all of the window sills and door sills while Mike, our physical property handy-man and good friend, worked on patching and painting the walls. Steve was also dutifully pulling electrical outlets out of the walls and making things look good again.

We couldn’t confirm whether the paint would dry as the right color on the first day, so we had no other option than to just check out work the following morning. Well…that morning it was painfully obvious where we had painted and we knew that we would have to do something about it, as the walls actually looked worse off where we had “fixed” them. The solution was to spread the paint on the walls that we had patched, and get the roller as close to the edges of the wall as possible, without actually performing the cut-ins. The reason for this was because we only had one gallon of paint and we really didn’t feel like making another trip, in the middle of a snow-storm, to get some more paint and start over.

Admittedly, that was probably the wrong decision but it’s how the cards fell that day, so there’s nothing I can do about it now. The rest of the day was spent finishing any trim that was left, and helping Steve with removing outlet covers to make the technical part of the job go a little faster. Halfway through the work, Steve brought up a really good point — we had actually purchased electrical supplies a few years ago when he completed work for us on our first floor unit. All of that material was sitting in the basement waiting to be used! We had actually purchased more outlets, switches, switch plates, and supplies even though we had enough to cover the work in the basement!

Well, remember that — because for all you non-English majors out there, this story is foreshadowing for the good part of this post (the lessons learned). The rest of the day was fairly uneventful, mostly electrical, some more painting, and cleaning up after ourselves. When all was said and done, the paint on the walls didn’t look half-bad, the paint on the trim looked pretty good, and the electrical outlets were all nice and uniformly white.

Right before leaving however, I realized that I didn’t actually like the mini-blinds that were currently installed in the unit. They looked and felt cheap, I’m trying to get top dollar in a slow market for my rental, so I wanted to do something to step up the appeal a little more. I decided that the next day we would hang cellular style shades, as we had done in our higher-end rental on the first floor of this property. The decision is one that I stick by, but the fact that I made it so late definitely came back to bite us (more on that below).

My flight was set to depart Logan Airport at 3:30PM, which meant that I would need to get there around 1:30 to make sure that I had enough time to get through security and not have to stress about it. I was lucky enough to convince Steve the night prior that he should drive me to Lowe’s so that we could pick up all the new shades so that I could install them before I left. This would have been an awesome idea, if I didn’t decide to rip out the old ones the night before. When removing the hardware for the existing mini-blinds, I actually exposed non-painted sections of the trim and didn’t have the time to properly address those spots, so I just installed the new shades over those areas and hoped that it wouldn’t show.

The last item to do was to finish cleaning, and refinish the floors. This is actually an easier process than it sounds, because our buddy Mike had introduced us to a product called Rejuvenate a few years back. Rejuvenate takes any beat-up wood floor and gives it a nice newer look to it, and really makes a world of difference in appearance (before and after below). I was able to complete the entire unit in under an hour for that one piece of the project, so I was happy.

I won’t bore you with the rest of the details of getting to the airport, going through security, and arriving back in Los Angeles, but I will jump into the lessons learned from all of this below!

DIY Furniture : These 5 sugar scrubs are so amazing!...

Home Improvement : 6 major tips to know before starting your...