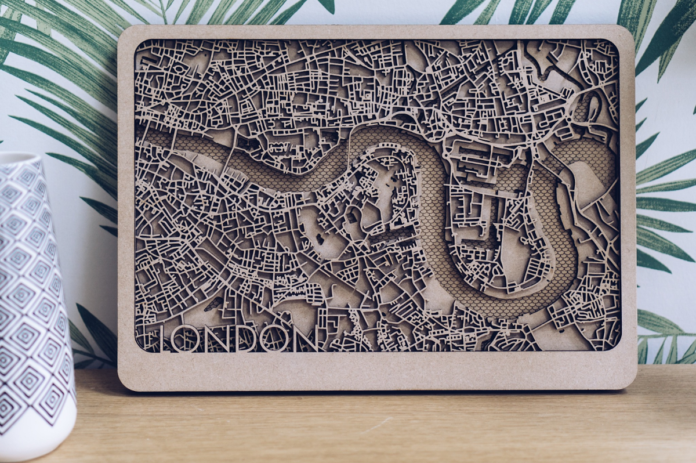 I just bought a Glowforge to print 3D maps. It arrives in the office later this week — I don’t know how I have lived without it. I ran into Dan Shapiro (CEO of Glowforge) last week, and spent hours talking about the future for 3D printing, and all the cool stuff people are building with Glowforge. I asked Dan to share some of his thoughts that have him so excited about lasers and DIY 3D printing, maker communities, and a future where you can bridge software and the physical world.

Q: So a Glowforge lets you print maps (and really anything) using real lasers — how does this work?

Short version: It uses a beam of light the width of a human hair to cut and engrave beautiful things out of natural materials with no ink, sawdust, cartridges, or basically anything other than wifi and power.

Long version: The Glowforge 3D laser printer falls into the family of CNC laser cutter/engravers. They’re normally big, they’re bulky, cost tens of thousands of dollars, look like they belong in a factory (because that’s where you find them), and the software is a giant pain in the neck to use. From the very start, we set out to open up the doors on the laser industry to your average consumer. What if you could sketch a design, then turn it into something real you could actually use? What if you could print things you wanted, needed, or just dreamed up on your desk, instead of relying on factories half a world away?

We refer to it as a 3D laser printer, because like a traditional paper-and-toner laser printer it can print at over 1,000 dpi, grayscale, black-and-white. Unlike a laser printer, it can actually cut, engrave, and create three-dimensional products.

So you’ve got a few different choices for how you can do that. When you cut, the laser moves slowly, at high power, and actually vaporizes the material underneath. The amount it removes is a tenth of a millimeter wide — about the thickness of your hair. It can also engrave. When it engraves, it moves back and forth, which is called rastering. The laser pulses thousands of times a second to vaporize material from the surface.

Creating your design can be as simple as drawing with a pen. Instead of going through complicated software, if you want a pendant, you can draw a pendant. Well, maybe you can draw a pendant… I’m a terrible artist. But I can trace a quarter, and draw a smiley face in the middle, and make my kids’ day with it. Real artists can do a lot more. In any case, each Glowforge has onboard cameras that will scan your design and transform it into a digital file that you can print, once or a hundred times.

Q: How long does it take to print?

Average print time is 12 minutes, but prints can take anywhere from a few seconds to a few hours.

Cutting speed is determined on a few factors, like the model you’re working with — the Glowforge Basic is quick, but the upgraded power and components of the Glowforge Plus and Pro print up to 20% faster. Thicker material will require more power and time. The chemical composition of the material can also make a huge difference. Some 1/4″ plywood cuts quickly; some 1/8″ plywood is impenetrable.

Engraving speed depends on the detail (higher detail is slower) and how big the area to be engraved is. The head has to move over the area, and while Glowforge is smart about setting its path, two dots an inch apart will take longer than two dots right next to each other.

Q: What are your favorite maps that your community has made?

It’s hard to choose just one, so I’m including a whole bunch.

Q: It can cut and engrave — is it safe to engrave maps into your laptop and iPhone? What materials can you use in the printer?

Unlike a traditional 3D printer which builds on layers of plastic, you can use all kinds of materials with Glowforge — its technology is subtractive, not additive. That includes things like wood or leather, fabric, cardboard, acrylic, and even chocolate.

In fact, you can print on hundreds of materials — a river rock, secondhand lumber, your iPhone — but to make things easier, we sell a line of materials that are ready to go. Proofgrade™ materials have a beautiful finish, so you don’t have to sand or shellac them. They have a protective coating, so when you’re done with the print you can peel it off and instantly have a perfectly finished product. But most importantly, they’re coded so the Glowforge recognizes them and programs all the settings for you automatically. That means you just say — cut or engrave, HD or draft mode, and off you go. It makes it really easy, with no fussing around about power, or speed settings, or the like.

As for engraving electronics, we just released a beta of engrave settings for the Macbook Pro Silver. It makes it super easy to engrave your laptop. We have lots more product engrave settings to come!

Q: So — why should someone get one?

If you were one of the lucky ones who got access to computers first, you know how it changed your life. We think that having your own Glowforge could do the same thing.

You can catch Dan Shapiro and I talking at Locate — our two-day festival celebrating all things location tech May 30–31st in San Francisco — on rapid iteration and crowdsourced projects. He’ll also be running 6 Glowforges throughout the conference so after you hear him speak, go see them in action (and maybe even get something custom to take home). Tickets are going fast, so grab them now.

DIY Crafts : If you have extra mint cases around...

DIY Projects Video: cute do it yourself wedding ideas