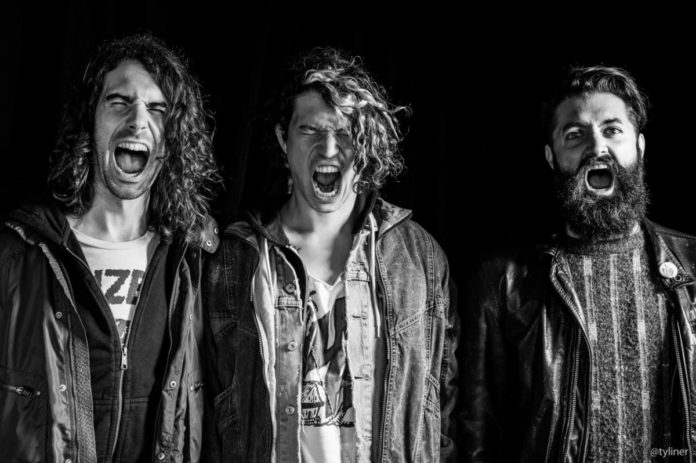 You know what, nothing gets me as amped as garage punk that infuses rock n roll songwriting with unhinged energy. It’s pretty much how and why this magazine was born, inspired by the wildness of house shows (“wow no way is that where the name of the magazine comes from??”) and DIY punk venues. And even though I no longer live in Chicago, I’m psyched to be checking out the long-awaited sophomore LP “1~2~3” from Chi garage punks Vamos, on one of my favorite DIY labels, Maximum Pelt, which was released on March 16.

Even though the album is already out, I’m premiering the track “2Ded4Lyfe” for you fine folks to check out today and to get a taste of the full album, which is a high-energy, extremely catchy, quirky adventure that I highly recommend. Vamos’ music lives somewhere at the intersection of LA party punks FIDLAR and the catchy garage rock/pop songwriting that made the Chicago DIY rock community of the past few years great, like that of The Rubs and Flesh Panthers.

Comprised of Ryan Murphy on vocals and guitar, Will Wood on bass, and Josh Lambert on drums, the band “formed during Chicago’s epic blizzard of 2011” and played everywhere from legendary Chicago DIY venues Wally’s World and Animal Kingdom to SXSW and Riot Fest. After their 2015 debut LP “Spiderbait” was met with acclaim, they were hard at work on this album when Ryan was hit by a car while biking and broke both his arms. Holy shit. But he has bounced back from his injuries with this excellent album and Vamos is ready to rock again, and they headlined The Empty Bottle for the release of this album on March 16. The album was recorded and mixed by Dan Rico at Ottoman Empire, co-produced by Rico and Vamos, and mastered by Jason Richards.

I definitely recommend checking out “1~2~3” for an infusion of pure Chicago garage punk energy, and keeping an eye out for their shows!