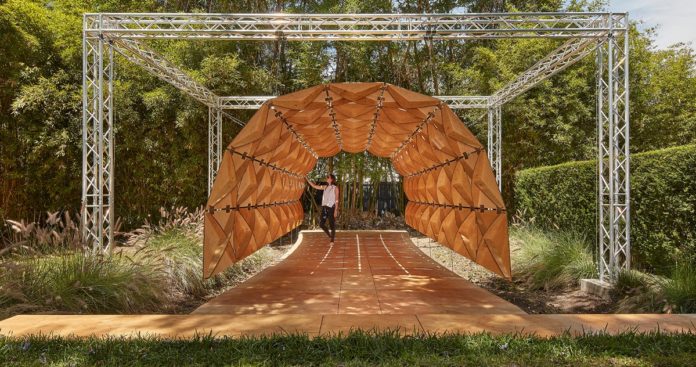 An exhibition shines the spotlight on creative collaboration.

The Schindler House sits near the foot of the Hollywood Hills, tucked behind a grove of bamboo on a residential street. A paradigm of early modernist architecture, it was designed in 1921 by the Austrian-born architect Rudolph M. Schindler as an experiment in communal living. Today, it houses a cultural institution: the MAK Center for Art and Architecture.​

In the summer of 2018, SOM teamed up with the MAK Center to present “Poetic Structure: Art + Engineering + Architecture.” The exhibition illustrates how these fields are interrelated — and how bridging disciplinary boundaries can produce remarkable results.

“You can say art and architecture are part of a continuum, and engineering is in support of all of that,” says SOM structural engineering partner William F. Baker. “When you’re working together with no separation between the two, you have what we call integrity — just like the Schindler House has integrity.”

SOM architects and engineers worked in partnership with the MAK Center to install the exhibition, creating an experience that flows through the house and gardens. A rich array of materials invites visitors to explore the structural engineering process. Models, installations, and conceptual visuals trace SOM’s design approach: an organic evolution of ideas guided by the principles of simplicity, clarity, and sustainability.

Read on for a sampling of the themes and ideas explored in the exhibition. To see it in person, visit the MAK Center before it closes on September 2nd, 2018.

Artists, engineers, and architects alike share a practice defined by inquiry, experimentation, and ingenuity. SOM has collaborated with visual artists for decades. Merging structural engineering expertise with artistic and architectural visions, these collaborations have led to the creation of works of art that challenge convention. From the Picasso sculpture at the Daley Center in Chicago, to Jaume Plensa’s “World Voices” installation at the Burj Khalifa, “Poetic Structure” gives a glimpse of the collaborative, creative process behind works of public art.

“The edges between what’s art and what’s engineering are very hard to define.”

“It takes a lot of engineering effort to make something appear effortless, seamless,” says SOM associate director Alessandro Beghini. “The artist has a vision, but also engineers have principles, and visions, and inspirations. It’s really about something that is more powerful than just the artistic vision; there’s also a structural story behind it.”

The product of one such collaboration can be seen less than a mile from the Schindler House, at The Jeremy Hotel on the Sunset Strip. A team of SOM architects and engineers worked with artist Janet Echelman to create a sculpture for the hotel’s central public plaza. It takes the form of a fiber netting structure, suspended between two towers​. The artwork, titled “Dream Catcher,” is a conceptual representation of brainwave activity that occurs during sleep and dreaming.

The sculpture makes a whimsical impression, yet its form is rooted in mathematical principles. SOM’s engineering team determined the geometry of the structural nets by using the “force density method,” whereby the length of each rope is proportionate to the force it carries, and its diameter.

How do scale and form determine the built environment, and how does perspective impact the way humans experience scale? Through models, sketches, and a custom-made, suspended pavilion, “Poetic Structure” invites visitors to explore these questions.

A building’s form determines both its architecture and structure, and also governs its behavior under the forces of nature. Scale, in particular, is critical to determining the building’s most appropriate structural system.

While issues of scale can sometimes be resolved by varying the proportions, new solutions are often required to adapt to different environments, to enable new building types, or to build at scales never before possible.

To illustrate this idea, SOM designers created a new pavilion for the MAK Center. Hovering above the garden, the doubly-curved kinematic structure — essentially, a large-scale, rigid origami structure — is made of hinged and stiffened wood panels. The flat panels are connected at various angles and dimensions with stainless steel hinges. The entire structure is suspended from aluminum trusses and braced with steel wires.

The form of the pavilion is inspired by the mathematical relationships between force and motion: it can be expanded or contracted into a version of the original geometry with minimal effort. Through its application of research developed within the structural group in recent years, the pavilion shows how conceptual studies can be translated to innovative built forms.

Engineers must assess and balance many different variables, sometimes at odds with each other.​ For instance, the goals of efficiency (to minimize material usage, energy expenditure, and carbon emissions) and economy (to minimize cost and time) are not always aligned. The most materially efficient form may not be the most economical if it becomes too expensive to build.

But these problems, however daunting, are well worth solving. Achieving a harmony between efficiency and economy can lead to the development of new technologies. It can also result in a design with a structural expression seamlessly integrated and inseparable from aesthetics and form.

“Poetic Structure” illustrates how this principle has been applied through various research initiatives, inventions, and projects at SOM.

The Timber Tower Research Project is one such example. It centers on the creation of a structural system for tall buildings that uses timber as the main material, rather than concrete and steel, in order to minimize the carbon footprint. Launched in 2013, the ongoing initiative began as a response to projected population increases around the world. With future growth expected mostly in cities, the use of timber can offset the carbon footprint of building in high-density urban environments.

Multiple reports produced since the launch of the project summarize subsequent research and testing performed by SOM architects and engineers. The findings support the use of timber in high-rise design from the standpoint of structural engineering, architecture, interior layouts, and building services.

“Poetic Structure: Art + Engineering + Architecture” is the latest iteration of an exhibition first shown in 2016. At each venue, the show takes on a unique identity, tailored to the hosting venue and city.

“What I love about seeing how artists and architects respond to the Schindler House is that this space has a personality, it has a curatorial perspective. It is like collaborating with another person,” says Priscilla Fraser, director of the MAK Center.​​

Several projects in the exhibition reflect SOM’s work in the Los Angeles region. These include the New United States Courthouse in downtown L.A., the Long Beach Public Library, and the expansion at LACMA in collaboration with Peter Zumthor. Seismic design is a particular focus, with a display of various engineering devices and systems developed to help buildings withstand earthquakes.​

From this expansive range of material, visitors to “Poetic Structure” should come away with a deeper understanding of how architecture — far from being an isolated discipline — is closely connected to many other creative fields.

“There are certain bonds between science and art, and bonds between left brain, right brain, nature and reason,” says SOM design director José Luis Palacios. “The edges between what’s art and what’s engineering are very hard to define — and that’s when work like this is truly integrated.”

DIY Crafts : Tons of handprint and footprint crafts for...

DIY Projects Video: Build A House in Less Than 3 Hours...

Home Improvement : Homeadvisor vs. Angie’s List vs. Houzz vs. Porch...