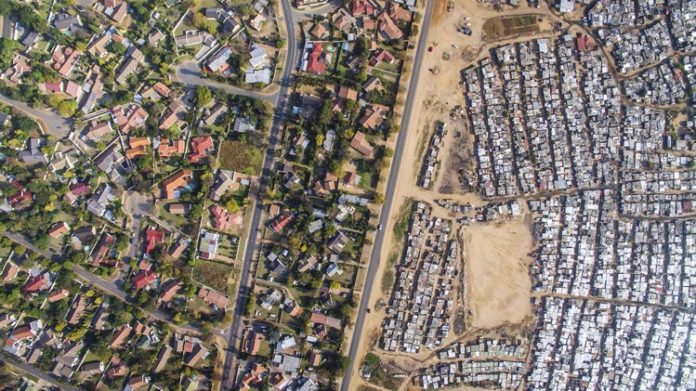 Across the world, urban clusters have — to a greater or lesser extent — social and economic differences. Reflected in space, these imbalances of income and access to education, health, sanitation, and infrastructure generate ruptures more or less visible — although drastically felt.

Although a daily reality for some, socio-spatial inequalities can often go unnoticed. Photographer Johnny Miller states, “Discrepancies in how people live are sometimes hard to see from the ground… Oftentimes, communities of extreme wealth and privilege will exist just meters from squalid conditions and shack dwellings.” Miller’s photo series ‘Unequal Scenes’ seeks “to portray the most ‘Unequal Scenes’ in [the world] as objectively as possible.”

Miller’s aerial photographs taken from a drone highlight ruptures in physical space. The photographer began his project in Johannesburg, South Africa where he photographed the scars of apartheid.

Discrepancies in how people live are sometimes hard to see from the ground. The beauty of being able to fly is to see things from a new perspective — to see things as they really are. Looking straight down from a height of several hundred meters, incredible scenes of inequality emerge. Some communities have been expressly designed with separation in mind, and some have grown more or less organically.
-Johnny Miller

Recently, Miller expanded his series and photographed cities in the United States, Mexico, Tanzania, Kenya, and India. Each of these places has different forms and urban morphologies specific to their respective contexts, however, the ruptures remain, conditioning — and limiting — social and spatial development.

DIY Projects Video: How to Make a Vacuum Cleaner at home...

DIY Crafts : Gold Accent Mantel. Gold is such a...