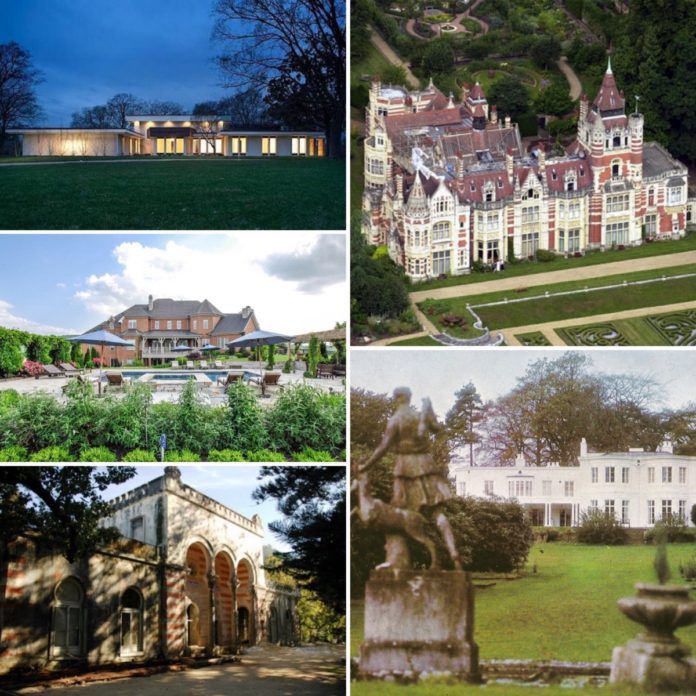 Whilst conducting research for my last article, I discovered so many rock star estates, on which I did not elaborate, as it would have made that article previous unbearably long. I therefore decided to save those properties for a later article, and this is it (no time like the present).

In this article I will focus on another 5 amazingly beautiful rock state estates: Tammy Wynette; George Harrison; John Lennon; Sheryl Crow and Madonna. The John Lennon compound, Tittenhurst, was also, at one point owned by another Beatle, Ringo Starr. That means that the only Beatle I have not focused on is Sir Paul McCartney.

In the last article I focused on some amazingly beautiful estates, but I almost feel that the estates highlighted in this article are possibly more extravagant and over-the-top than in the previous article. For example: three of the houses highlighted in this article are listed as national monuments in their relative countries, and one of these is listed as a UNESCO World Heritage Site.

So let’s get down to business, here are the lavish estates on which I focused in this article:

Tammy Wynette was known as the First Lady Of Country. She was a mega Country star in the 1960s and 1970s and is best known for her song, Stand By Your Man. This house was bought in 1974, by her then, 2nd of five, husband and fellow country musician, George Jones, who purchased the house as a present for the Country Diva. It was therefore a foregone conclusion, that when she decided on a name for the estate, that the house would inevitably be known as First Lady Acres.

The couple divorced in 1975, after 6 years of marriage, and Tammy continued to live on the property until 1992, when she put the house on the market. The house has since been owned by various music industry luminaries.

Gayron Little, a well known record label boss bought the house from Tammy Wynette, it was then bought by Bluegrass Country legend Earl Scruggs in 1999 and most recently the house was owned by Scott Underwood, the drummer of the well known band, Train. He put the house on the market in 2017, for $5.5million, after he and his wife did extensive renovations to the estate.

The house is considered an iconic music landmark and is of major historical significance. It is situated in Oak Hill, a suburb in Nashville, Tennessee…The home of Country Music. The house is designed in a mid-century modern style.

The estate is located in an area known as Henley-On-Thames in Oxfordshire in England. The house was originally commissioned by eccentric lawyer Sir Frank Crisp and was completed in 1889. Sir Crisp owned the house until 1919. The house was then sold to Sir Percival David. Sir Precivl donated the estate to the Salesian Don Bosco Catholic order of nuns, to be used as a school. The nuns started a school called the Sacred Heart School. By the 1960s the house was in a state of disrepair.

George Harrison bought the house in 1970. He lived in it until he passed away of cancer in 2001. His wife, Olivia Harrison, inherited the property and owns it to this day.

After John Lennon was murdered by a crazed fan in New York, outside of the Dakota building in New York in 1980, George installed additional security measures at the house, including razor wire on the perimeter of the estate. These measures did not, however, prevent a crazed fan from breaking into the house in 1999 and stabbing the legend and his wife, puncturing one of his lungs.

In 1972 George Harrison added a 16-track recording studio on the property, known as FPSHOT (Friar Park Studio at Henley-On-Thames). The studio was considered to be more state of the art than main studio at Abbey Road. George recorded most of his solo albums there and even recorded albums by The Traveling Wilbury’s and Ravi Shankar at the facility.

George Harrison put the whole estate up as collateral to fund the Monty Python movie “Life Of Brian”.

This estate is situated in Beggar’s Bush near Ascot over a parish border into Sunninghill, in the English country of Berkshire. The land on which the house resides, was originally given as a gift to the Prioress of Bromhale, to cultivate in 1239. The house itself was built in 1737 by local craftsmen and designed by architect William Crossland. Over the years the house has been owned by various high profile individuals.

The estate holds the distinction of having been owned by two of the Beatles: John Lennon in 1969 and Ringo Starr in 1973. John Lennon only lived in the house until 1971, at which point he immigrated to the USA, New York specifically, where he lived until he was assacinated. He never returned to England.

John and Yoko did extensive renovations to the house, when they first bought it, breaking down many walls on the main floor to create an open living space, which went on to become known as The White Room, in which they recorded the famous music video for the song “Imagine”. The Imagine movie was filmed on the property.

In 1970 John built ASS (Ascot Sound Studios) on the property, making it one of the first residential recording studios. The studio gave him the ability to record at anytime he wished, without the pressures of being scrutinized by EMI staffers and the public, who were always forcing him to make more commercially viable music.

When John moved into the property in 1969, Srila Prabhupada, the founder of the Hare Krishna movement, moved onto the property, where he stayed with his followers, in a block of guest houses and gave lectures in a tall building, on the northern part of the estate, which was originally used as a hall for chamber music recitals. The building became known as The Temple.

When Ringo Starr bought the property, from John in 1973, he opened up the recording studio to the public and renamed it Startling Studios. Ringo lived in the house until 1988 when he sold it to Sheikh Zayed bin Sultan Al Nahyan (ruler of Abu Dhabi) for £5million, who still owns it to this day. The main building on the estate received a Grade II designation in 1972.

The house on the farm was originally constructed in 2000 and Sheryl Crow bought the farm in 2006. The house is situated in the music capital of Nashville. It is specifically located in College Grove, Tennessee.

After spending 20 years in the entertainment capital of the world, Los Angeles, she decided to move back to her roots and to be closer to her family (sister and parents) who live about three hours away in Missouri. She, however, grew tired of the relaxed lifestyle, about two years after moving into the house, and has spent the last decade trying to sell the property. She initially started by marketing the house at $7.5million and has over the years reduced the price, to where it stands today at $3.8million.

The farm is an operating equestrian farm and also contains a solar farm. Over the years she has bought additional properties, that have added acreage to main estate. One of her contributions to the farm was a free standing recording studio facility, which consists of various recording studios.

The main house is a triple storey mansion. There is an additional apartment above the garages and a three bedroom guest house. She has recorded various albums on the property: Detour and 100 Miles From Memphis. There is also an old traditional saloon on the property, fitted with brass fixtures and bar stools.

The farm is located in Sintra, Portugal, just outside of Lisbon. This palace was originally owned by a priest who was part of the Order of St Jerome, who left it, as a legacy, to the 15th Count Of Redondo, Don Fernando Maria De Sousa Coutinho Castelo Branco e Meneses in the late 18th century. The estate was later bought by a millionaire who commissioned the construction of a bell tower, after which the estate is named: Quinta do Relogio (Farm of the Clock). The clock tower was later demolished and no one knows to where it was relocated.

In the 19th century it was bought by Manuel Pinto da Fonseca, under which the property became known as The Count Of Monte Christo Farm. After Fonseca’s death the house was left to his mother and brother, and later bought by the Ribeiro Ferreira family, in the 1970s.

In 1997 the house was classified as a UNESCO World Heritage Site. Over the years the estate has deteriorated and the main 4 storey mansion is today uninhabitable. In 2017 Madonna moved to Lisbon to support her son’s soccer career. She bought the dilapidated mansion and has moved into the Villa on the property, whilst renovations are undertaken on the main house. The villa has been refurbished by well known Portuguese architect, Thiago Braddell.

The palace is constructed in a Moorish Revival style and consists of various Islamic inscriptions including the one at the main entrance, which reads “There Is No Victor But God”.

Living is luxury is quite a thing and maintaining these lifestyles must be a costly endeavor. It’s been fascinating researching these various, beautiful estates and learning how and what has motivated superstars to develop these amazing properties. Although it may seem that these stars have developed these vast estates purely for self-indulgent purposes, it is clear that the main purpose is not only selfish, but also practical and 100% justified.