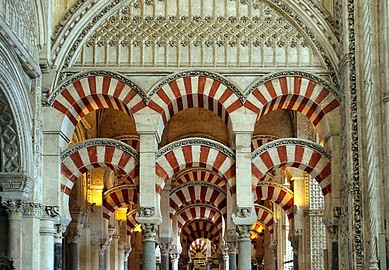 “You have to go to Córdoba,” said literally everyone I came into contact with this past summer, after I told them I was traveling across Spain in search of Islamic Architecture.

Long-overshadowed by the Alhambra, an Islamic palace and fort belonging to the city’s eastern neighbor, Granada, Córdoba had not initially been on my to-visit list. I had landed in Granada and had enjoyed the spicy-sweet sangria and the little creamy pionono desserts, the dread-locked hippies and passionate-angry Flamenco dancers, and perhaps most memorably, the scent of flowering jasmine and the image of strands of vibrant, magenta bougainvillea tumbling down the white terraced landscape. I had planned to head straight to Sevilla, the next large Spanish city on my list, but instead I hopped on the afternoon bus to Córdoba.

Córdoba is nice. Pleasant parks. Easy walks. The same white-washed exteriors and sense of vibrancy that makes Granada so easily loveable. Most interestingly, however, and especially so from the point of view of someone in search of Islamic Architecture, is the Mezquita — the Mosque of Córdoba.

The Mosque was built from 784–900s and various parts were added under various rulers. In 1236 the Mezquita was converted, or re-converted (some ascertain that a church was located on the site prior to the Mosque), into a Catholic Cathedral. The minaret of the mosque was turned into a belltower and a church structure was built in the middle of the mosque’s interior space.

From an aesthetic point of view, the building is decidedly strange: The sort of additive and combative nature of the Spanish Mulsim-Catholic heritage is evident, and the candy-cane-like arches spring upward and across the space in a way that leaves one feeling a little bit like Alice in Wonderland.

Overall, the space is awe-some and was worthy of the praise heaped upon it and passed down to me by those I had spoken with about my architectural quest. An interesting aspect to note, regarding who is allowed to worship in the space, is that it is exclusively a place reserved for historical observation and Catholic prayer. Islam is not allowed in this place of absolute revelry of Islamic style architecture.

Muslims who pray in the space are promptly escorted out by security.

DIY Furniture : Are you trying to start or grow...

DIY Projects Video: Easy ways to spice up your room! +...

DIY Furniture : 20 Make-overs that will blow your mind!...