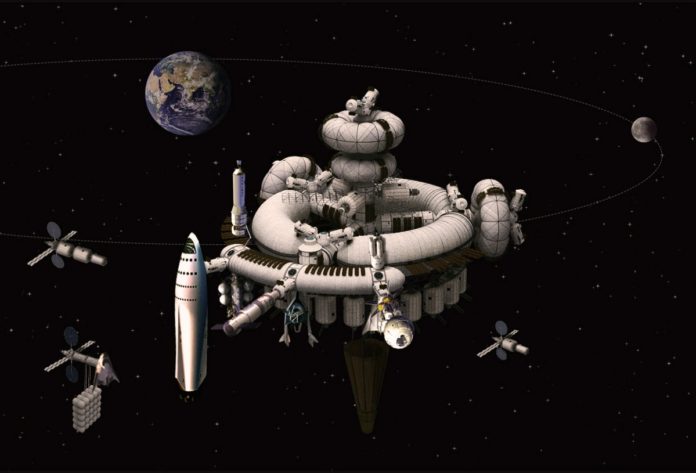 Architecture : How I designed a space outpost – Space Decentral – Medium

I wanted to explore the possibilities of outer space, unbound from preconceptions or Earth architecture.

As a Master’s student at University of Houston’s Sasakawa International Center for Space Architecture (SICSA), I was exposed to many interesting aspects of space exploration. One that I’m particularly intrigued about is the daily lives of astronauts, and their most mundane activities — how they sleep, eat, shower, exercise, work, etc. When the time came to choose what to focus on for my design thesis, I knew it would have something to do with habitation, community, and daily lives in space.

My undergrad was in architecture and urban studies with an equal emphasis on both. This gave me an understanding of how dwellings changed throughout the centuries in relation to the evolution of cities. I think in most cases, our definition of “home” is very intertwined with our definition of “city”. And I believe as humans set sail for the stars, this intertwining will stay strong. What defines a home and a city varies greatly from culture to culture, and changes with time. However, in a broad sense, a home is for your personal and intimate activities, alone or with close family members, and a city is a collection of private and public areas where the community can interact and coexist. For my thesis, I wanted to explore the possibilities outer space gives us and think of spacefaring communities — from incorporating micro-gravity into the design, to creating new architectures not bound by the elements we have had to deal with here on Earth, like rainfall, wind, sun, predatory animals, etc.

I began this journey by researching the space colony/station concepts that have been proposed. Among other great books and texts, I read Gerard O’Neill’s The High Frontier and got a glimpse of utopian space societies, where centrifugal forces and cylindrical structures would allow for artificial gravity and the establishment of communities that laid out pretty much like suburban cities, complete with garden patches, parks, and terraces. It bothered me that we would be going so far out into space only to reproduce our Earth cityscapes, with all of the problems we find today. I also researched the state of the art of space stations and found that the main design constraints that defined the small tin-can, corridor-modules approach were pretty much obsolete, and there was no real need to keep reproducing this model in the near future. With more powerful rockets we should be able to send larger payloads to orbit, and with emerging technologies we should be able to construct modules in space, or at least service and convert large fuel tanks into more reasonably sized habitat units (as was done with Skylab, four decades ago).

But I couldn’t simply design a space settlement floating around in space for the fun of it — it needs a purpose, a reason for being there. I believe with the growth of the space economy, fueled by private industries in collaboration with space agencies around the globe, we will reach a point in which it will make sense to have a large facility in orbit that incorporates and offers a multitude of services. From fuel depots to research labs, from space tourism to material processing, humans will establish an industrial village where companies can secure a “physical address” in space without the cost and operational burden of constructing and launching their own facilities.

And so New Venice was born — a multi-industry space outpost that caters to all sorts of space industries and commerce, offering a common infrastructure and — most important for me — settlement for the workers.

I revisited my studies of how cities are formed — from tiny villages that grow along fruitful rivers, to industrial settlements that develop around resource mines. From port cities, that became important as trade routes were established, to planned cities that were purposely built in the middle of nowhere as social experiments. This would be useful when I began to lay out the city and sectorize the different activities. To understand the social relations and requirements of people in confined spaces or industrial settings, I looked into analogous activities or situations, such as supercargo ships, oil rigs, polar research stations, submarine crews, remote industrial plants and cruise ships. Each gave me a different insight into community life in extreme situations or social isolation. I used ULA’s Cislunar-1000 Economy plan as a guide to the activities, industries and services that would happen on New Venice, and the information from analogs to define worker population. Eventually, I defined that the outpost would have a nominal population of 400 people: 350 workers and 50 visitors.

With all my data in hand, it was time to begin the design work. Deciding on a concept was by far the hardest work. I wanted to break free from traditional tin-can assemblies, but I needed to stay within the realms of possibility. I decided my outpost would be operational 50 years in the future, but I couldn’t exactly invent materials and technologies that don’t exist yet. After much debate with my professors, weeks of frustration, a few eureka moments, and a lot of CAD work, I finally decided on a concept to follow — a hybrid structure, that would combine hard-shell modules, inflatables, and in-space construction. Once that was defined, it was only a matter of modeling everything and resolving the details of how everything would come together and work as a whole.

While the commercial and industrial sectors of New Venice were pretty much improved versions of existing concepts, with a few twists here and there, the community sector was my real innovation. As I mentioned at the beginning of this article, I wanted to explore the possibilities that space gives us and come up with new architectures. I wanted to create an exciting and stimulating living environment with comfortable personal “homes” for each space citizen. In the end, I think I achieved my goal. Although my “pressure envelope” concept using 3D printing in space for the construction of the community modules might not exist yet, it is not unfeasible — and I believe we will have a similar technology in way less than 50 years. And once that engineering problem is solved, the interior architecture is 100% ready to go, since it is based on light-weight frame structures and composite panels.

New Venice has three community “islands”, or modules if you prefer. Each one is a large sausage-shaped volume that houses 192 individual living pods — which can be combined to make larger spaces. The pods are distributed along the perimeter of the islands, leaving the entire central volume free for community use. Distributed in this free space are spherical modules, each of which houses a different communal service or activity — shops, restaurants, recreation, cafe, etc. And people are free to push and float from sphere to sphere in order to move around.

Do I think New Venice will ever be built? Probably not exactly as I envision, but something similar might. Regardless, I am glad I went ahead with this concept for my thesis because it allowed me to break the status quo and rethink the way we design for space. As we pioneer into this new era of space exploration, we need to start thinking outside the box in order to come up with the ideas that will shape the future. After all, we had barely begun flying blimps when Julius Verne wrote From the Earth to the Moon, inspiring the generation who would effectively begin to reach for space.

I can’t post my thesis yet because it’s in process of being published by the University. But if you want to know more, feel free to contact me and I’ll email you a copy. Meanwhile, my final presentation can be found in my Space Decentral profile.