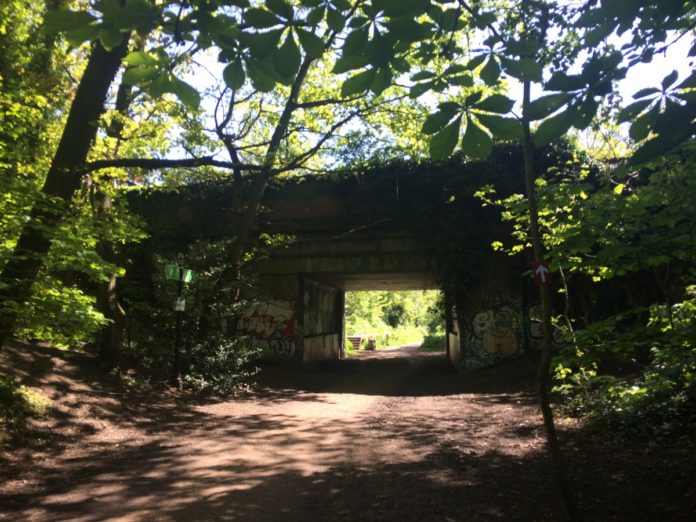 Continuing your reporter’s 120km circumnavigation of the capital for charity… and the hell of it. (Pt1: Wembley to East Finchley)

Nipping through East Finchley’s grade II-listed Tube station — designed in typically deathless Streamline Moderne style by the marvellous Charles Holden — and avoiding the arrows of the 10-foot archer who points Londonwards down the Northern Line while representing the area’s ancient affiliation with hunting, we enter Cherry Tree Wood, one of three successive remnants of the ancient forest of Middlesex through which the archer tiptoed.

He’d doubtless also roam through Highgate Wood, which we now enter through metal gates bearing the images of animals (or targets, for our mate Jeffrey the archer). Named in the Domesday Book, Highgate Wood is thought to be 12 times as old as that particular tax-assessment quest: properly ancient, the forest dates back to the last ice age.

Snaking through ancient forest and medievally-adjudged taxable property, we’re following a much newer invention: the Capital Ring. Welcome proof that humans can work together, the Ring was conceived in 1990 and completed by 2005, 33 local councils connecting existing paths and forging other links to create a 75-mile escape route for Londoners.

Well, 75-ish: the Ramblers Association say it’s 71 miles, Transport for London claim 78 miles, while Walk London say it’s 78 but their individual section guides add up to 83 miles and their estimate of the average would put the total at 73. Whatever, its signposts give confident updates (“Blackwall Tunnel 17.5m, Crystal Palace 34.4m”) which can sometimes serve to sink the heart.

Such cartographical confusion can seem amusing in abstract, but it’s a blow when we find the finishing line is farther than advertised. At the day’s first checkpoint in Queen’s Wood, we’re furnished with water and snacks, and the somewhat less welcome revelation that what was described as a 30k walk is in fact 36k. Having just passed the 10k point, our onboard sat-navs are shuttled back from “a third of the way there” to the much less satisfying just-a-bit-more-than-a-quarter mark.

But never mind the destination when the journey is pleasant. Emerging from this storied woodland via a distressingly steep hill, we’re obviously having a better day than the driver angrily honking his horn at traffic failing to access the A1 due to the presence of, well, more traffic.

At this point, a quick look at the map would suggest that the route was about to pick its way across nearly five miles of densely inhabited urban jungle, between the green lungs of the ancient forest and Finsbury Park. Approaching noon on a hot bank holiday weekend, this didn’t seem a particularly attractive prospect. But the next 90 minutes were the finest of the walk, the sort that makes you pine for friends and family to have been there with you, the kind that makes you plan to drag them back there as soon as possible.

The absence of green on the large-scale map was deceptive: nature can find a way in most places. And this place, the Parkland Walk, wasn’t a road but an abandoned railway line. The plants that line any railway are merely playing the long game, waiting for the wheels to stop turning, at which point they’ll begin their own reclamation project.

The Great Northern Railway had opened the line in 1867 — a touch after the greatest era of rail expansion, but they were speculating on the expected popularity of the nearby Alexandra Palace. By the 1930s the freshly-minted London Transport — brought about via a Parliamentary bill introduced by Peter Mandelson’s granddad — had big plans, known as the New Works Programme, which included linking this branch to what would become the Northern. (It pleases me enormously to learn that one name considered for that thick black north-south line, which links Tooting and Camden among others, was the Egyptology-flavoured Tootancamden Line.)

Anyway, Hitler saw to that, if not before the construction of never-used platforms at Highgate Station, just south of which we joined the line. Closed to passenger traffic by 1954, it had limped on with freight until 1970 when the tracks were torn up and the cuttings abandoned. In moved the flora and fauna: 250 species of plants nuzzled by hedgehogs, run through by foxes, alighted upon by butterflies and hidden behind by muntjac deer. It’s London’s longest nature reserve.

It’s also, as is the way of these things, a fascinating conjunction of human and natural landscapes. I’ve written before about New York’s High Line, a prime example of finding a use for lines rendered economically unviable. Forcibly rendered level for the benefit of trains, these lines can be quickly repurposed as accessible leisure areas — in some cases wheelchair-friendly.

As formerly fanatical railway expansionists on a densely-populated island, the British have punched above their weight in rail-trail conversion: with more than 150 tracks in use, the nation has the second-longest repurposed network in Europe. (The Germans, dons of health and indeed efficiency, are way out in front.)

Despite its will-this-do name, the Parkland Walk is a very fine example of a railway repurposed into something more than a path. There might be some who dislike graffiti, who crave neatness, who curl a lip at the remnants of previous eras inelegantly abutting what they’d like to see as curated leisure zones. Each to their own, but they are not me. I’m with Jonathan Meades in insisting that we shouldn’t accept someone else’s hierarchy of building types, that an industrial ghost can be just as right as an impeccable Georgian palace.

Unlike the High Line, the Parkland Walk doesn’t often have the benefit of dazzling vistas down Manhattan’s glass canyons: much of it is cutting, so it’s surrounded by tree-lined slopes. But that adds to the appeal, and not just for the deer and hedgehogs. Walking along the line feels like a benevolent secret. Mooching under road bridges designed to accommodate steam trains is urban exploration without the trespassing or the curious need to film oneself hanging over a precarious precipice. The graffiti adds colour, metaphorically and literally. There are ghosts here. The locals said that a spectral “goat-man” haunted the line in the 1970s and 1980s, when the kids would dare each other to walk the line at night-time.

As you walk, the past rises up through the ground. As you pass under a bridge, the sides of the trail suddenly rise in perfectly parallel formations. With their edges softened by vegetation, it can take a moment to realise you’re walking through a ghost station — Crouch End, unused for nearly 65 years.

If you’ve read the Stephen King story of the same name, an HP Lovecraft ‘Cthulhu Mythos’ tale of souls lost to the underworld through a mysterious portal, you can be forgiven a quickening step. That burst of speed will take you all the quicker through the next tunnel to an extravagantly-graffitied series of tall brick arches, atop one of which is a spriggan — a goblin found at old ruins guarding treasure.

It’s only a sculpture, and so are the skateboard ramps of the Crouch Hill Community Centre, all rumbles and chuckles like the Cape Adventure Playground, over which looms the excitingly modern block of 85 Crouch Hill.

Names like Crouch Hill, Muswell Hill and Mount Pleasant suggest the varied topography through which the railway slices, and as the land falls away to the east the cuttings become bridges affording peeps through neighbourhoods like Stroud Green. After the verdant claustrophobia it’s a neat sensory trick, fittingly acting as a bridge to the walk’s next big reveal: once through the serious bridge defences that protect the East Coast Main Line, you’re in Finsbury Park.

If you were asked to name a London park, Finsbury might not be the first suggestion. But it was one of the first of the capital’s great green spaces to be created for the people, as opposed to aristocracy or, conversely, common land. Originally set to be named Albert Park, it was ratified by Parliament in 1857 and opened to a presumably gasping public in 1869.

Although grade II-listed, it’s not always worn well — after the Thatcher government wound up the GLC in the mid-80s, Haringey Council struggled to foot the bill for its population’s 110-acre back garden and it needed a Lottery grant early this century for a welcome spring-clean — but on a beautiful summer’s day it’s a welcome wide-open world of families and couples enjoying their chosen forms of leisure. They may neither know nor care for the park’s mixed military history: in World War One a large pacifist meeting was forcibly broken up, and in World War Two it was an army training ground and anti-aircraft post.

Coming up next: From rail to river…or is it?

The Mencap Capital Challenge is a charity walk circling London in four quarters, each roughly 30km. You can donate or sponsor the writer at justgiving.com/garyparkinson1974. You can also join in: the East quarter (Royal Albert Docks to Crystal Palace) will take place on Sat 26 May, the South quarter (Crystal Palace to Richmond) on Sat 9 June, the West quarter (Richmond to Hendon) on Sat 7 July.