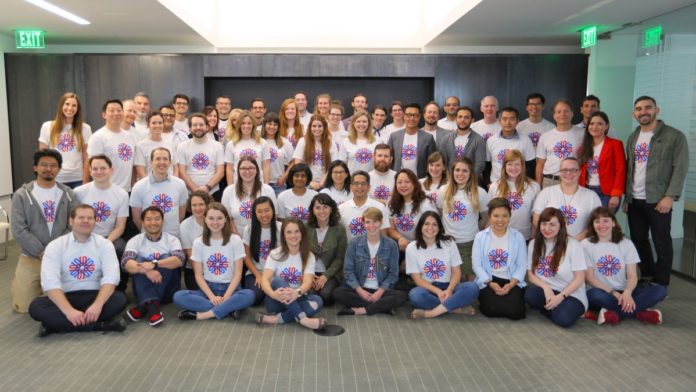 April 2018 marked a significant milestone in the story of our office —namely, our 10 year anniversary. It’s hard to believe how far we’ve come, and how much we have accomplished, in the 10 years since opening our doors. Over 400 projects, several landmark ground-up buildings, and a staff that started at 5 people and recently broke the 100-person mark. It’s been a great ride, and we wanted to celebrate it in a fitting manner — by reflecting on what we’ve accomplished in our city, and toasting the next 10 years with optimism and gratitude. And there’s no better way to celebrate our accomplishment than to throw an epic party! So we invited 300 of our closest friends to join us for a night dedicated to just that — celebrating 10 years of Gensler’s impact in Austin.

500 West 2nd Street — the Gensler-designed LEED Gold tower in the heart of the Warehouse District — served as our venue during a picture-perfect spring evening. The soaring bronze and marble-clad lobby, along with the beautiful street front at the entrance to the building, provided a perfect backdrop for the event.

Because we feel that it’s important to set the right tone from the start, our opening act was none other than the UT Marching Band! If you’ve never seen this group march down the street, it is quite a spectacle, guaranteed to get any party started. We kept the performance a surprise from our guests, and it was great to see people perking up as a distant beat of drums grew louder, and then a look of recognition as that signature orange came into view. Phones came out, the Horns flew up, and it because clear that this was no ordinary night.

The other star of the show was the food, which was as beautiful as it was delicious. North Italia and Flower Child, both located at 500 West 2nd Street, and Austin-favorite Contigo, provided beautiful, Spring-inspired spreads for our guests to enjoy.

The night’s main entertainment was provided by Tomar and the FCs. These guys really know their stuff. They put on an amazing performance, and made sure the party was fueled with energy and toes were tapping. If you haven’t caught one of their shows around town, do yourself a favor and see them live!

Of course the most telling sign of a great party is not the music or the food, but seeing people connect, catch up, play, laugh, and have a genuinely good time. Looking around the room it was hard not to notice the atmosphere of good will, revelry and fun, and it made us reflect once again on how lucky we are to be working with such a tremendous group of people as our employees, clients, and industry partners.

The party was part of an ongoing, year-long, multi-channel campaign that explores Gensler Austin’s impact and accomplishments. The campaign, created by our internal design team, has its own visual identity, which was incorporated throughout the event in ways big and small. The campaign can be explored further on social media under #gensleraustinten, or by visiting our anniversary website at www.gensleraustinten.com