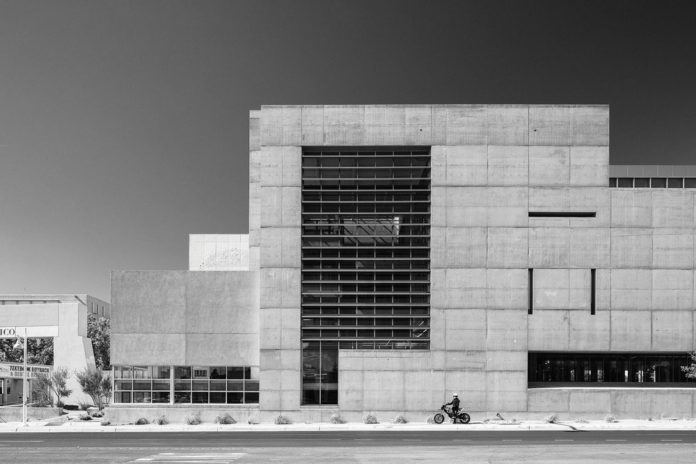 It’s six in the morning, and Ben is picking me up outside my garage in Denver. We are about to embark on a six-hour drive from Denver to Albuquerque to meet renowned architect and motorcycle enthusiast Antoine Predock.

Last year I discovered the work of the New Mexico-based architect, who is celebrating 50 years of architecture, and have been photographing his buildings since.

I work as an architectural photographer, and I am fascinated by Antoine’s career. So much so that, in my own time, I have photographed his buildings in Arizona, Wyoming, Las Vegas, Minnesota and Colorado.

Antoine has designed award-winning museums, libraries, university buildings and private residences all over the globe. He has been awarded the prestigious AIA Gold Medal (joining the likes of Frank Lloyd Wright and Louis Kahn), among many others, and is considered to be one of the most notable American architects of our time.

His buildings are works of art and come out of the ground like geological events. They truly become part of the landscape, with canyon-like approaches, mountainous shapes, dramatic sloping rooflines, and a deep and thoughtful respect for place — historically, culturally and geologically.

We arrive at his Albuquerque studio shortly after noon, and there he is waiting for us with a diverse trio of his motorcycles on display (Vincent, Ducati and Zero Electric), one for each of us!

He resembled a rock star more than an international architect, with his steampunkish sunglasses, beanie, black-on-black outfit, skateboard shoes, and Ducati T-shirt. Antoine is particularly fond of Ducati motorcycles, we soon come to learn.

He greets us like old friends, invites us into his studio, and gives us a quick tour. The space provides us with a glimpse into his design process, with tables displaying clay models, 3D-printed models, gallery walls of sketches, paintings, large-format handmade collages, photographs, awards, and stacks of books upon books.

Antoine proceeded to show us his large collection of motorcycles, from a 1929 Indian Scout to numerous Ducati and BMW sport bikes, to his current favorite: a custom electric Zero motorcycle, which had been raced in the Colorado Springs Pikes Peak Hill Climb.

Following the tour of his studio and my lusting over his beautiful collection of motorcycles, we crack open some S.Pellegrinos (it’s still early in the day) and settle into a small, comfortable seating area in a window-filled corner, with expansive views of the Rio Grande river valley and Sandia mountain range.

We asked Antoine all kinds of questions, and he talked to us like friends — explaining his process, designing architecture, and passion for motorcycles. He shared with us his body-and-motion philosophy, a tale of a recent motorcycle crash and the archives he recently donated to the University of New Mexico.

It was a time I will cherish: The three of us talking about motorcycles, architecture, design, and life all while overlooking the most beautiful otherworldly and iconic New Mexico landscape.

Antoine is fascinated with the idea of body and motion. Throughout his career, he has studied how the body moves through spaces and landscapes. For him, the motorcycle embodies this philosophy more so than anything else.

As he poetically says,

“The connection to place, to the land, the wind, the sun, stars, the moon … it sounds romantic, but it’s true — the visceral experience of motion, of moving through time on some amazing machine — a few cars touch on it, but not too many compared to motorcycles. I always felt that any motorcycle journey was special.”

We all know this feeling, and it’s a sensory experience like no other. I can see how this influenced Antoine’s work. Prior to discovering his buildings and learning about his design process, I would not have connected these two. I am now seeing things differently as I ride through a landscape, or in the way I approach and move through a building. I have become hypersensitive to my own body and motion.

“The body moves through space every day, and in architecture in cities, that can be orchestrated,” Antoine says. Not in a dictatorial fashion, but in a way of creating options, open-ended sort of personal itineraries within a building. And I see that as akin to cinematography or choreography, where episodic movement, episodic moments, occur in dance and film.”

I’ve experienced this with his buildings I have photographed, most notably the Nelson Fine Arts Center at Arizona State University. The building has multiple options to enter, pass by, and interact with the space, from its subterranean levels to ascending its tower into the sky, overlooking the campus.

“Architecture is a ride — a physical ride and an intellectual ride,” says Predock.

Antoine shares with us a recent motorcycle crash he experienced in Los Angeles: Someone drove right into him while he was riding. He wasn’t lane-splitting or anything aggressive like that (and he did comment on how much he enjoys lane-splitting), but just out of nowhere someone hit him, resulting in a brief hospital visit with several non-life-threatening injuries. He has mainly recovered, although at the time we were meeting, he was still dealing with some pain.

He goes on to talk about how he wears armor now, to protect him from the elements, like “asshole commuters,” he jokes. Wearing motorcycle armor for protection, he ties it back to architecture — how he designs for place. For example, designing for the New Mexico landscape, the extreme conditions of of which have defined him as an architect.

“I try to understand ‘place’ on a deeper level than just the physical or environmental aspects,” he explains. “It includes cultural and intellectual forces, too. It’s an inclusive approach that brings in many disciplines and sees place as a dynamic thing.”

Antoine’s education and entire career has been rooted in New Mexico. The Land of Enchantment has defined him as a person, his design process, and his architecture.

“New Mexico has formed my experience in an all-pervasive sense. I don’t think of New Mexico as a region. I think of it as a force that has entered my system, a force that is composed of many things. Here, one is aimed toward the sky and at the same time remains rooted in the earth with a geological and cultural past. The lessons I’ve learned here about responding to the forces of a place can be implemented anywhere. I don’t have to invent a new methodology for new contexts. It is as if New Mexico has already prepared me.”

Before we wrapped up our afternoon with Antoine, we follow him down to the University of New Mexico School of Architecture and Planning, a building that he designed. I wanted to capture some architectural photographs of him passing by one of his buildings on his motorcycle.

The strong and rectilinear university building, with its articulated southern-facing façade, is a modern interpretation of the New Mexico landscape, specifically inspired by the cliffs of Canyon de Chelly. It sits on Central Avenue, a main east-west street that was once part of the famous Route 66.

The sun was raking the southern facade as cars passed by, and I capture a handful of compositions with Antoine on his electric Zero Motorcycle, beautifully showcasing the scale of the building in comparison to Predock and his motorcycle.

While there on campus, which happens to be graduation day, we join the architect inside to see dozens of celebrating graduates of the Architecture and Planning School in their red caps and gowns. Antoine is greeted with hugs and smiles as he congratulates the students.

We say our goodbyes, and just like that we are on the road back to Denver. As we passed through the New Mexico landscape with the sunset in our rearview mirror, I couldn’t help but think about body and motion. What a great philosophy and way to live this life.

DIY Crafts : Need some ideas for gifts for neighbors??...

DIY Furniture : If you have a TV tray lying...

DIY Furniture : Are you looking for the best places...

DIY Furniture : How to Turn a Curbside Door into...