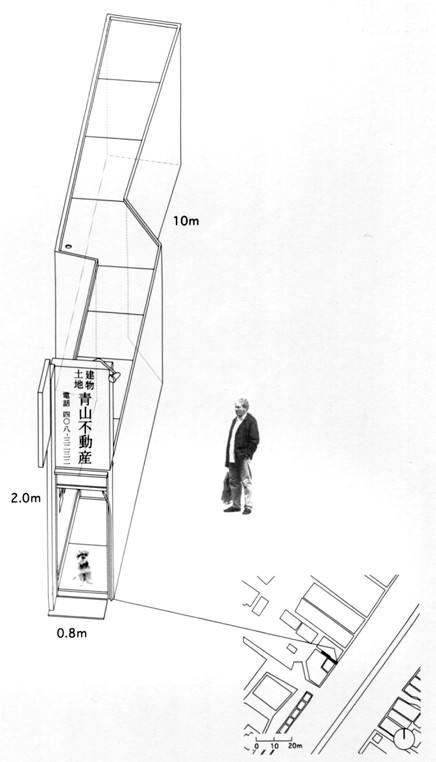 My chosen techniques for the assessment 2A: “Drawing and notation” are Atelier Bow Wow’s drawings. In 1992hiharu Tsukamoto and Momoyo Kajima founded Atelier Bow Wow, a Tokyo-based architecture firm (Portico 2016). They were considered as one of the most creative and productive of the present day (Portico, 2016). Their city analysis and observations have based on a variety of their urban theories such as “Pet Architecture”, “Behaviourology”, “Micro public spaces”, “Da-me Architecture”, etc (White, 2007). The idea for “Pet architecture” was inspired by the work of “ Made in Tokyo”. The concept of “Pet architecture” was introduced as the small and tiny buildings that took use of the leftover urban spaces (Agile City nd). This is the typical architecture for many shops, restaurant, cafes in Tokyo due to its land limitation. Those buildings are cheaply built and designed just to fit the provided spaces. Therefore, they have unique structures and shapes, which are different from other normal buildings. An example for that is the drawing of the Aoyama real estate agent (see in figure 1). The building located in a very special area, which is the small way between two other buildings. Its front is very narrow but its length is very deep. On the other hand, the drawing is very precise and with the exact scale and shapes. It also included details such as the board and animal & human to demonstrates the viewers a real vision about the buildings and the relationship between human and it.

For my work, I started to explore different areas around Central to find the features of the city, which is exactly my chosen architects did to Tokyo. After that, I found that Sydney also has many “Pet Architectures” like the stores near the station. My chosen area is a barber shop near the station and between other stores. It also has a narrow front but a comfortable space inside. I used 2B pencil, metal ruler, rubber and squared A2 paper for this task. It is very interesting that a modern and developed city still has some small areas like this and through my drawing, I want to show people my exploration about Pet in Sydney.

DIY Furniture : These 5 sugar scrubs are so amazing!...

Home : Do NOT Make your dining room an office! Sell...

DIY Crafts : This will make your inexpensive candles look...

DIY : Articles — The Rise of the DIY (Do-it-Yourself) Culture in India!...