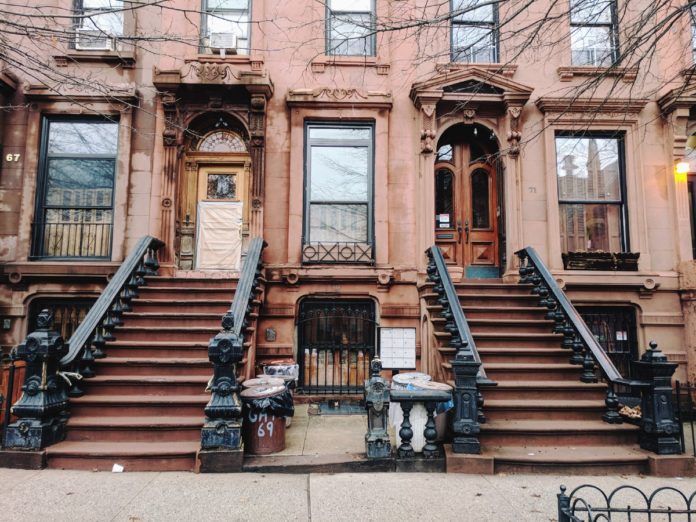 In 1970, Alan Burnham had a problem. Burnham was the director of the Research Department at the New York City Landmarks Preservation Commission, and to quote his own words from a letter to Adolf Placzek, architectural historian and librarian at Columbia University’s Avery Library:

A crisis has arisen here at the [Landmarks Preservation] Commission which I will explain to you regarding stylistic appellations — in other words, the battle of the styles in now quite literally on! [….] One of our Commissioners has said that he will refuse to approve any report in which the word Neo-Grec is used. This would leave us in an impossible situation as Neo-Grec is a fine appellation much used by Schulyer [a respected architecture critic] and others …

Burnham also sought out help from the architectural historian Henry-Russell Hitchcock, further explaining the crisis caused by the trouble-making commissioner:

One of our Commissioners, who shall go unnamed, wrote the following about it: “The term ‘neo-grec’ in any report, referring to the unfortunate period 1805–1885, will automatically result in my disapproval of that report. This term is inaccurate historically, misleading, unscholarly and simply stupid…”

Unfortunately, Burnham never wrote a formal defense of the neo-Grec as a distinct style and the argument he used to bring the commissioner into agreement remains a mystery. Placzek responded to Burnham’s letter, but merely agreed that the term was appropriate and approved of Burnham’s argument. If Hitchcock replied, it has been lost to time. Maybe the unnamed commissioner saw the light and gave in, and maybe he apologized for calling it “unscholarly and simply stupid,” or they merely agreed to disagree. We know however, that Burnham succeeded in his argument, since the term has remained in use by the Landmarks Preservation Commission with nearly 3,300 buildings described as representative of the neo-Grec style within the over 36,000 designated New York City landmarks.

While Burnham’s argument solidified the role of the neo-Grec style at the Landmarks Preservation Commission and, as a result, in the historic architectural discourse in New York City, one rarely hears of the style used elsewhere. Often lumped in with the Italianate or the Eastlake/Stick styles, and occasionally vaguely described as “19th-century commercial” in its occurrences along America’s Main Streets, the neo-Grec style remains misunderstood and overlooked. Now, nearly fifty years later, I think it is time to revive this discussion and place the neo-Grec style more firmly — and accurately — within the discourse of architectural history.

Part one of this series on the neo-Grec style can be found here. For more images of the neo-Grec in the wild of our urban environment see my instagram (@knowing_neogrec).

DIY Crafts : These cool magnets can be made with...

DIY Crafts : Ideas for using a Smash book to...

DIY Crafts : A free sewing pattern for a sunglasses...