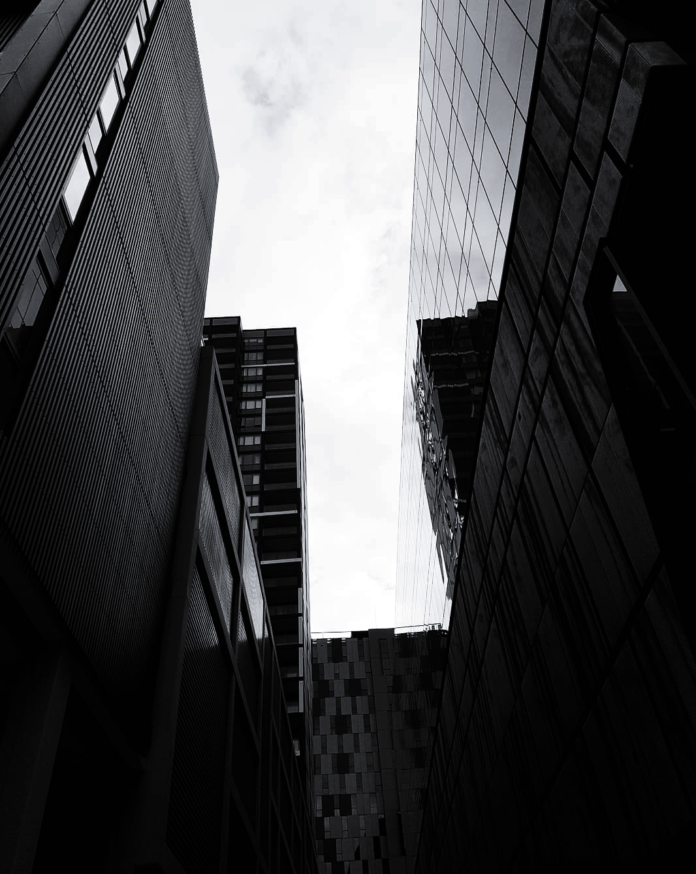 An image can spark ideas, stories and new profound meaning. Ezra Stroller understood this and enhanced this thought through the conceptual use of shadow and light when capturing the contemporary buildings around him. The image above is inspired by this ‘mid century modern architecture’ construct, as can be effectively seen through multiple visual techniques, such as tone, positioning and framing but mainly the use of black and white.

The compositional format of the image aligns quite well with Ezra Stoller’s photographs, due to its use of reflection, which draws out the enhancements within the shadows and lights that are being emitted from the building, which is evident within the left-hand side of the image. The framing of the image is quite bold in a sense that it’s gradient/value and format of the finished form allows the viewer to see not only a tall building, but the mirroring and light which is strongly reflected between the two buildings.

A critical concept that is used within this image is the dramatic tone which embellishes the thought of how these buildings are a gateway into the future. By capturing this spectrum it really expresses the thought of how high society is aiming in order to construct a more modern world. By capturing a three-dimensional object and enhancing it’s feature through it’s tone really captures the techniques that are used by Ezra Stoller.

‘Perfectionism’ is also what widely inspired this image, as can be effectively seen through the symmetry between the windows and height of BOTH buildings. This can indirectly travels back to an approach that contemporary buildings occupy with shaping the future. This image draws multiple meanings and conclusions about how architecture is shaped by the growth within society. The positioning of the camera really draws out the power from the buildings, which really captures a feature of Ezra Strollers work, which is seen within the photograph taken of the John Hancock Centre in Chicago.

This contemporary building has been redefined in a more futuristic tone, thanks to the use of shadow and light. By capturing the city within it’s ‘peak’ hours it really expresses how confined society is in a general sense that individuals are lost within a world with tall buildings. This image truly seems empty and motionless, which would describe most individuals in todays fast paced world. This image had sparked not only new ideas about what shapes society, but also stories about the individuals within it, this is what leads to new profound meaning.