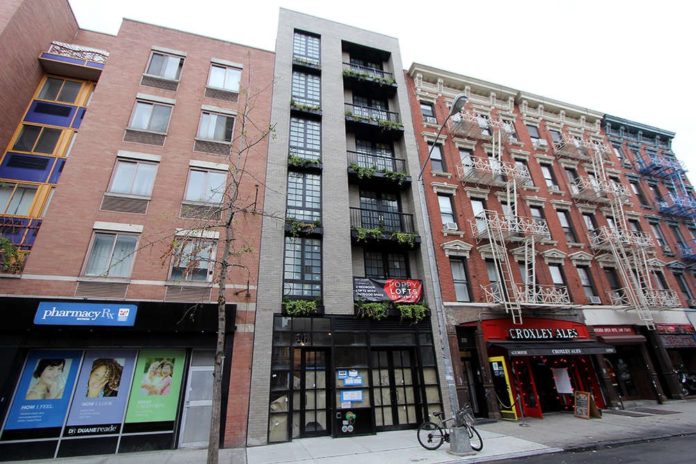 Alphabet City in lower Manhattan is a neighborhood that has become emblematic of the changes New York City has experienced over the last few decades. However, the rapid construction and new condos and co-ops that exist today do not always hint at the neighborhood’s turbulent and creative past.

Alphabet City was once a sprawling farm owned by New Amsterdam Governor, Peter Stuyvesant. The property remained in the Stuyvesant family until the 1800’s when one of the Dutch governor’s descendants began selling parcels to poor German and Irish immigrants. Eventually built-up, overcrowded and filled with tenement buildings, the area became known as a slum.

Low real estate prices in the 1960’s and 70’s attracted beatniks, poets, hippies and artists, giving rise to a flourishing independent-thinking community. Alas, real estate interests and community activism do not make for good bedfellows and the 1980’s saw neighborhood tensions rise. Emblematic of this are events surrounding the Christodora House at Avenue B and East 9th Street.

Constructed in 1928, the Christodora House was a settlement house that provided food, shelter and education to poor families and immigrants in the area. Decades later, facing operating difficulties, the 16-story property was eventually taken over by the city and sold to a private developer for $62,500 in 1975. It sold several times after that and in 1986 it began a conversion to luxury condominium apartments. Partly as a result, Tompkins Square, a de-facto site for hundreds of counter-culture youngsters, squatters and homeless people, became a hotbed of raucous demonstrations. The local community tried to instill a 1 a.m. curfew in the park, which was previously open for 24 hours.

What followed in the name of gentrification and class warfare was the Tompkins Square Park riot — a clash between protesters and police where more than 30 people were injured.

The neighborhood’s independence is also evident in its ingenuity.

For instance, back in the 1970s, members of the community banded together to build their own windmill on the top of 519 East 11th street. According to local legend, the windmill even kept on the lights during the infamous 1977 blackout in New York City.

This innovative spirit may have carried over from the 1800s. Back then, intestinal infections and diseases like tuberculosis caused by bad milk ran rampant in New York City’s child population, especially in poor communities like Alphabet City.

To combat the problem, then Macy’s co-owner, Nathan Straus, created a program to make pasteurized milk affordable. On Avenue C, he set up a “milk laboratory” to test dairy and distribute millions of bottles. He commissioned architect John B. Snook, who designed the original Grand Central Station, to create a structure. In 1894 when the lab opened, 34,000 bottles of safe, pasteurized milk a day were distributed daily. By 1905, that number rose to three million bottles. During the first decade of the Avenue C Milk Laboratory’s operation, the child mortality rate in New York City was cut nearly in half.

Today, Alphabet City is but one of many neighborhoods that continues to transform. Several new buildings have replaced older structures and existing tenements continue to be upgraded to suit market forces, changing times and the demands of a new population of residents.

As specialists in pre-war renovation and restoration, our firm is involved in this work. Among other efforts, we have provided zoning and code consulting to building owners looking to expand and upgrade their properties and bring them up to current code. In another case, we recently completed a two-apartment combination at the very Christodora House noted above.

As an interesting side note, our own David Katz, as a Cooper Union student in the 80’s, climbed into that then-abandoned-building late at night for the thrill of the views (not that we would condone that today). The East Village was a very different place back then. Little did anyone know what the future of the neighborhood would hold.

Home : HOW TO GET YOUR APARTMENT AIRBNB READY – Jenny...